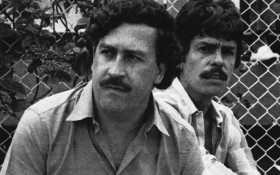 A vestige of the drug wars that made Miami notorious for violence and smuggling in the 1980s is being razed, with its new owners anxiously sifting through the wreckage for any last traces of the reign of Pablo Escobar.

Demolition began Tuesday on a pink waterfront mansion in Miami Beach that the Colombian drug lord owned before the U.S. government seized it in 1987. Escobar died in a shootout with Colombian National Police in 1993.

“I’m very excited to see the house of the devil disappearing right before our eyes,” said the property’s new owner, Christian de Berdouare, who owns the Chicken Kitchen fast-food chain. 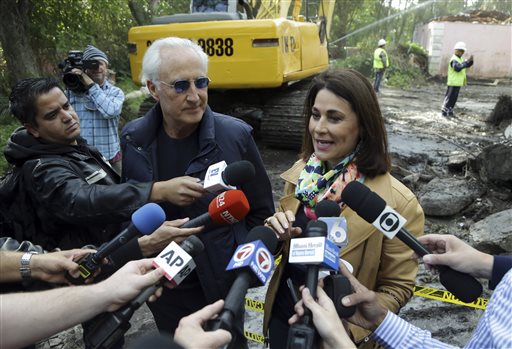 “This was the biggest criminal in the history of the world. I would like to be associated with something more uplifting, but nevertheless, it is a part of the city,” he said.

Though the mansion was listed under Escobar’s own name, it’s unclear whether he ever spent any time in Miami Beach.

At the height of his powers, Escobar was one of the wealthiest men in the world, with a cartel that supplied the vast majority of cocaine smuggled into the U.S. Recently recaptured Mexican drug lord Joaquin “El Chapo” Guzman built on Escobar’s expansion and diversified the cocaine business with other drugs including methamphetamines, heroin and marijuana.

At roughly 6,500 square feet, the four-bedroom mansion built in 1948 would have been modest for the “King of Cocaine,” whose net worth was estimated in the billions. The palm-lined neighborhood is now home to Bee Gees singer Barry Gibb and other celebrities who have built massive homes behind tall hedges and gated driveways.

The house has unfettered access to Biscayne Bay, with Miami’s skyline glittering nearby. A former neighbor told de Berdouare that he remembered seeing cigarette boats regularly coming and going in the water outside the house. 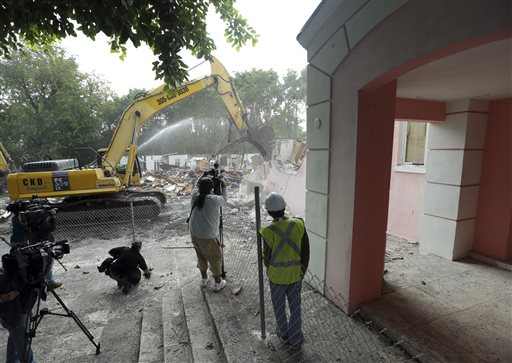 He also remembered loud parties and a mustachioed man who traveled with a fleet of vehicles and armed men.

“I think they used the cover of a very residential neighborhood in order to conduct their illicit trade,” de Berdouare said.

Unaware of its history before he bought it from a private owner in May 2014 for $9.65 million, de Berdouare’s wife insisted on having a Roman Catholic monsignor bless the property before they commenced plans for a modern home there.

“A lot of people forget what life was like in Miami in the 1980s, when people were literally doing cocaine out in the open in bars and no one wanted go to South Beach at all and there were shootouts in the street,” said de Berdouare’s wife, journalist Jennifer Valoppi.

The couple hired professional treasure hunters and a documentary film crew to comb through the structure before and after demolition for ties to Escobar’s cartel. Unusual holes have been found in floors and walls, along with a safe that was stolen from its hole in the marble flooring before it could be properly excavated, Valoppi said. 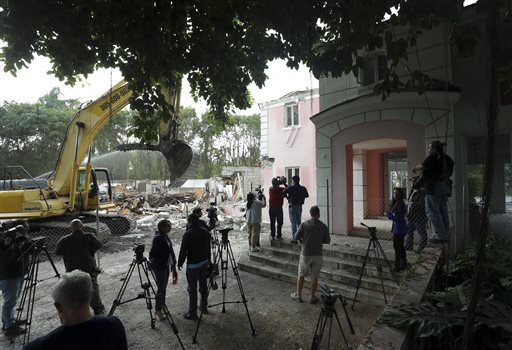 Before demolishing the fire-damaged mansion that sat abandoned for years, de Berdouare hired professional treasure hunters to comb through the structure for traces from Escobar’s days. (AP Photo/Lynne Sladky)

Valoppi said former federal law enforcement officials warned the couple that people who knew Escobar’s crew might return to the house to steal whatever might remain from the cartel’s heyday. The mansion had been damaged by fire and was prone to break-ins as it sat empty after its 2014 sale.

The seizure of Escobar’s property marked in a turning point in the government’s efforts to stop the drug smuggling, said Mark Schnapp, who was an assistant U.S. attorney from 1982 to 1989 and one of the lawyers who wrote the 1986 federal indictment in Miami that recognized Escobar’s Medellin cartel as an organized business enterprise.

“One of things we discovered in 1987 was the Medellin cartel members actually had (Florida) property in their own names, which was a big surprise,” Schnapp said.

The seizure of civil assets that began in the 1980s helped finance law enforcement actions against the cartels, in cases that eventually led to, for example, the Miami indictment of Panamanian dictator Manuel Noriega on drug trafficking charges, he said.

“In a sense it’s kind of the end of an era,” Schnapp said, watching an excavator tear into the garage roof, “but there’s still a lot of drugs that come through Miami.”