Democrats trying to bail out Hillary in Iowa - The Horn News 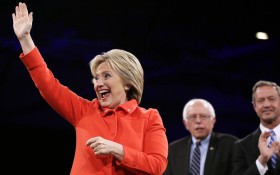 The Hillary Clinton campaign has been slowly imploding for months — and now it looks like the Democratic Party is making one more push to save it.

The Iowa Democratic Party recently announced that it would be holding a last-minute town hall for Democratic candidates on January 25, just days before the Iowa caucuses.

The event, which will feature Clinton, Vermont Sen. Bernie Sanders, and former Maryland Gov. Martin O’Malley is being billed as one last chance for voters to get to know the candidates. But several media outlets, including Vanity Fair, are reporting that the event is really designed to be a “saving grace” for Clinton.

The Democratic National Committee, which is run by the former co-chair of Clinton’s 2008 presidential campaign, has long been criticized for attempting to tip the nomination in Clinton’s favor. The number of debates has been limited, and many of the events have been held at odd times to discourage viewership.

The idea was to let Clinton ride out what had once been a formidable lead. But now Clinton is facing the very real prospect of losing in Iowa — and suddenly the Democratic Party is changing its tune and holding more events to help her shore up support.

A recent CNN/ORC poll found that Sanders has opened up an 8-point lead over Clinton among likely Iowa caucus-goers. That represents a sharp reversal of fortune for Clinton, whose lead had been in the double-digits for months.

And multiple polls have shown that Clinton may be set to lose big in New Hampshire, the next contest after Iowa.

So it’s looking more like the Iowa town hall isn’t just a last chance for voters to hear from candidates — it may be a least chance for Clinton’s campaign to stave off early disaster.