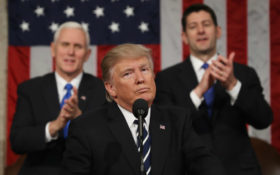 Trump’s budget proposes steep cuts to welfare programs to balance the government’s books over the next decade.

Critics have long accused Democrats of using entitlement programs to shackle the poor, and say the Democratic Party knows that voters who are dependent on welfare will vote for them.

Trump’s budget threatens to break those chains — and it has liberal lawmakers furious.

The proposal is laced with cuts to domestic agencies, food stamps, highway funding, and many welfare program — and Democrats are on the attack.

The budget proposal says that if Trump’s initiatives are adopted and government spending slashed, the U.S. budget deficit will start declining and actually reach a small surplus of $16 billion in 2027.

During the campaign, Trump attacked the weak economic growth of the Obama years, and pledged that his economic program would boost growth from the lackluster 2 percent rates seen since the recovery began in mid-2009.

Trump’s new budget is based on sustained growth above 3 percent, sharply higher than the expectations of most private economists.

“The president believes that we must restore the greatness of our nation and reject the failed status quo that has left the American dream out of reach for too many families,” the administration said in its budget which was titled, “The New Foundation for American Greatness.”

The budget does feature a handful of domestic initiatives, including a six-week paid parental leave program championed by Trump’s daughter, Ivanka. Another $200 billion in federal infrastructure investments is promised to leverage another $800 billion in private investment.

Trump would keep campaign pledges to leave core Medicare and Social Security benefits for the elderly alone but that translated into even deeper cuts in programs for the poor such as food stamps.