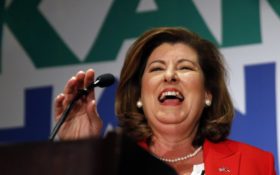 The desperate Democratic Party thought they really had a chance at winning over a traditionally Republican House seat, but they lost — again. And now Democrats are wondering, will we ever be able to win?

Republican Karen Handel declared victory in Georgia’s 6th Congressional District, winning about 52 percent of the vote to quell the upstart phenomenon of Jon Ossoff, a 30-year-old Democrat who raised more than $23 million and became a symbol of opposition to President Donald Trump.

Handel devoted much of her speech to thanking national and state Republicans for backing her campaign, and offered her appreciation to the president.

A day after the election, Democrats are left with the bitter hope of another tighter-than-usual margin, still searching for a contest where anti-Trump energy and flush campaign coffers actually add up to victory.

But this election should come as a wake-up call, the anti-Trump platform is not one that wins.

Republicans immediately crowed over winning a seat Democrats spent at least $30 million trying to flip. “Democrats from coast to coast threw everything they had at this race, and Karen would not be defeated,” House Speaker Paul Ryan said in a statement.

Democrats must defend their current districts and win 24 GOP-held seats to regain a House majority next November, but after Handel’s win, it doesn’t look promising for Dems.

Sponsored: Is America ready for this type of medicine?

In a Tuesday night tweet, Trump congratulated Handel, saying “we are all very proud of you!”

“She personally told me she was rock solid” with the president, said Webb, 70. He added that 6th District Republicans united against a Democratic candidate many saw as a tool of his national party leaders.

Handel is the latest in a line of Republicans who have represented the Georgia 6th since 1979, beginning with Newt Gingrich, who would become House speaker. Most recently, Tom Price resigned in February to join Trump’s administration. Handel emphasized that pedigree often during her campaign and again during her victory speech.

She also noted throughout the campaign that she’s lived in the district for 25 years, unlike Ossoff, who grew up in the district but lives in Atlanta, a few miles south of the 6th District’s southern border.