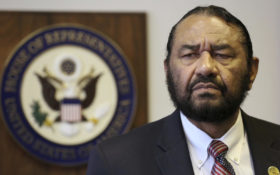 Democratic Rep. Al Green is trying to keep his promise to impeach Trump by Christmas — and it has sent his fellow Democrats in a panic.

A majority of Democrats even joined in with Republicans to oppose the move, sending a clear message to the “alt-left”: Stop trying to impeach the president, it won’t work.

Green was prepared to put the House on track for a vote Wednesday on impeaching Trump, in an effort to back his unfounded claim of ‘high misdemeanors’.

But, unfortunately for the liberal lawmaker, his effort was another major loss for the radical “alt-left” — and has drawn opposition even from many in his own party.

Green introduced his resolution on Wednesday under a rule that requires the chamber to vote on the issue within two days.

After his resolution was read aloud, the House voted 364-58 to immediately table the resolution, meaning the vast majority of Democrats joined with Republicans in voting to table it in the GOP-led House.

Even Minority Leader Nancy Pelosi was among many Democrats who opposed the idea.

A problem for Democrats is that opposing Green’s resolution puts them at risk of angering many of the party’s rabidly anti-Trump voters.

But, that did not shy most Democrats from voting in favor of keeping Trump in office.

Some Democrats tried talking Green out of offering his plan. They did the same thing in October, when he proposed a similar resolution but never demanded a vote on it.

Green said on the House floor that he planned to take the road less traveled in seeking Trump’s impeachment. He’s convinced it’s a road worth traveling, but he said, “I ask that no one take this journey with me.”

Do not worry, Green… only seven more years to go until you can get off your fantasy journey.