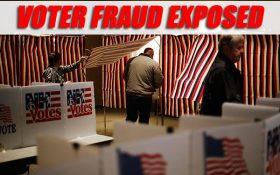 There’s a major scandal unfolding in Michigan where a celebrated local leader of the state Democratic Party has been arrested.

Sherikia Hawkins, city clerk for Southfield, Michigan, is accused of messing with absentee ballots in connection with the contentious 2018 midterm election. Simply put, she tossed out important votes — 193 to be exact!

“Voting is fundamental to the very essence of our democracy,” Michigan Attorney General Dana Nessel said at a news conference. “It is incumbent upon state governments to safeguard the electoral process and ensure that every voter’s right to cast a ballot is protected.”

This is true anywhere in America – and anywhere else that free and democratic elections are treasured.

But it’s especially true in the key swing state of Michigan, a battleground decided by just over 10,000 votes in the 2016 presidential election.

They say every vote matters. But in Michigan? Every vote really matters.

And now, those votes could be called into question if it turns out other Democratic officials were acting like Hawkins, who is accused of falsifying absentee ballot records.

The city of Southfield’s official biography of Hawkins states that she “takes pride in using unconventional methods to engage the community in voting.”

But if the allegations are true, her “unconventional methods” include falsifying records.

Local media reports that the Oakland County Clerk’s Office uncovered irregularities with 193 absentee voter records during the canvass period after the 2018 elections.

“It appears that Hawkins had switched her original reports with altered reports,” Michigan State Police Detective Sgt. Larissa LaMay wrote in an affidavit cited by the Detroit News.

Specifically, she allegedly invalidated 193 voter files, claiming they had no return date or signatures when they did.

Fox News, citing court documents, said Hawkins is accused of entering the falsified data into the computer record – but staff found the real records in the trash can at the elections office.

Hawkins has been charged with falsifying records in violation of state election law, forgery of a public record and misconduct.

She’s also charged with three counts of using a computer to commit a crime, the network said.

“Our elections are the foundation of our democracy, and under my and Attorney General Nessel’s administration there will be no tolerance for any actions that undermine that foundation — anywhere, anytime, by any person or official,” Michigan Secretary of State Jocelyn Benson said in a media release.

Until very recently, Hawkins was the toast of the party.

In May, the state Democratic Party even honored her with an award – bestowing upon her the Dingell/Levin Award at the annual Legacy Dinner.

Amazingly, the party still boasts of giving her the honor on its Facebook page:

Posted by Michigan Democratic Party on Saturday, May 18, 2019

And just two years ago, she was named on the Michigan Chronicle‘s “40 under 40” list.

Now, she’s facing potentially years in prison. The forgery of a public record charge alone carries a possible sentence of up to 14 years.

Local officials say the ballots did not have an impact on any races, and every vote was ultimately counted.

But conservative activists want to make sure.

“The charges against Ms. Hawkins are extremely troubling and must be fully investigated,” Michigan Rising Action, a local branch of the conservative advocacy group American Rising, told the National Review. “The integrity of our elections is essential to the protection of our constitutional rights and individual liberty.”

They’re calling for an audit of every election overseen by Hawkins.

It’s a nationwide problem documented by The Horn News and other media outlets as well as nonpartisan organizations such as the Pew Institute, which last year found 24 million voter registrations – some 12 percent all U.S. registered voters – to be inaccurate, including 1.8 million dead people registered to vote and 2.75 million people registered in more than one state.

With the 2020 election just 13 months away, time is running out to ensure these problems are fixed.