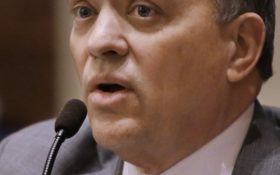 An Illinois state lawmaker appeared in court Monday on a public corruption charge, becoming the latest in a series of top state Democrats targeted by federal prosecutors.

Rep. Luis Arroyo made an initial appearance in U.S. District Court in Chicago, where a prosecutor told a Magistrate Judge Maria Valdez that the 65-year-old is accused of “offering an illicit payment to an official.”

The Chicago Democrat stood next to his lawyer in court in a gray suit, looking outwardly calm, his hands folded in front of him. Prosecutors didn’t immediately offer any details and were set to unseal the complaint later in the day.

If convicted, Arroyo could face a maximum of 10 years in prison, they told the judge.

Throughout 2019, at least half a dozen Democrats have been charged with crimes or had agents raid their offices and homes. The U.S. attorney’s office in Chicago, headed by John Lausch, an appointee of Republican President Donald Trump, has spearheaded the investigations against the Democrats, some of them acknowledged powerbrokers in the party.

Arroyo is from Chicago’s West Side and has served in the Legislature since 2006, representing the 3rd District. He is chairman of a House appropriations committee and is on the public utilities committee and transportation committee.

Arroyo has been re-elected to four terms as an Illinois state representative and as elected the general assembly’s assistant majority leader in 2017.

He has been a member of the special appropriations budget committee workgroup, an executive committee member and former chairman of appropriations for public safety, according to Arroyo’s state House webpage.

Arroyo helped secure $1 million for a playground at Mary Lyon Elementary School, $1 million for Shabbona Park and $7.3 million for updates and improvements to the Healy Metra Station, the webpage said.