Democrat: This debate is rigged for Hillary! - The Horn News 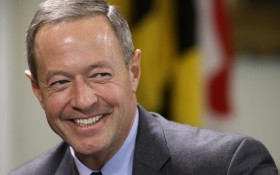 The Democratic party is rigging tonight’s debate — and the entire debate schedule — to ensure the “inevitable” victory of former Secretary of State Hillary Clinton, according to candidate and former Maryland Governor Martin O’Malley.

O’Malley is so fed up with the Democratic debate plans to “circle the wagons” to protect the Clinton campaign that he’s encouraging protests in front of the Democratic Party headquarters.

The fiery O’Malley has long been critical of the limited number of debates being held by the Democratic Party, something that’s widely seen as an attempt to protect Clinton’s lead in the polls and help her run out the clock.

“This will really be the first time that nationally voters see that there’s more than one alternative to this year’s inevitable front-runner, Secretary Clinton,” O’Malley said.

Even tonight’s setting will be Clinton-friendly. She’ll occupy the center podium and the event is being held at  a casino owned by Las Vegas tycoon Steve Wynn.

Wynn was reported to have hosted a fundraiser for Clinton this spring.

Political analysts are expecting Clinton’s challengers at tonight’s debate to shy away from her private email account and server use while serving as secretary of state. The issue has been a constant refrain from the GOP candidates, and the Republican National Committee released a new television ad Monday that focuses on Clinton saying she didn’t send any classified information via the server. But that’s likely too hardball.

Expect Chafee to go after Clinton for her 2002 vote to authorize the war in Iraq. Chafee, at the time a Republican, opposed the invasion and he’s said Clinton’s support for the war, which she has more recently called a “mistake,” is at the center of his decision to run.

Webb, a Vietnam veteran and former Virginia senator, has deep experience on military issues and foreign policy and has been critical of Clinton’s handling of the conflict in Libya. Last year he said the Obama administration’s unilateral decision to use military force in Libya was improper.

O’Malley is critical of Clinton for her recent shifts on policy issues, among them her opposition to the Trans-Pacific Partnership trade deal, which he calls a “reversal.”

Even if they don’t boost their own candidacies, less popular contenders could still have an impact on a debate stage. In an October 2007 debate, Clinton’s campaign was damaged by her vague answers on providing drivers licenses for undocumented immigrants. One of the candidates who was critical of Clinton was then-Sen. Chris Dodd, who never broke into the top tier.

Democratic strategist Jim Manley said he expected O’Malley to be aggressive in going after Clinton in the debate, mostly because it’s his only chance to draw attention to his own campaign. The other lower candidates are expected to hang back from attacking Clinton.