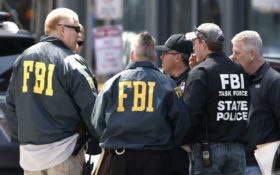 A Democratic senator has been charged with stealing more than $600,000 in federal funds received by a healthcare company she directed and using the money to pay for her wedding and other personal expenses, federal prosecutors said Wednesday.

And she’s not the only Democratic lawmaker that’s in legal trouble.

Robinson, a Democrat elected to the General Assembly in 2018 from a Memphis district, is also the director of The Healthcare Institute, which provides training for jobs in the health care field, prosecutors said.

The Memphis-based school received more than $2.2 million in federal grants from the U.S. Department of Health and Human Services.

From 2015 through 2019, Robinson stole more than $600,000 and used it to pay for her wedding and honeymoon, a 2016 Jeep Renegade for her daughter, travel and entertainment for her family, and an event for her state Senate campaign, prosecutors said.

She also used the money to pay for legal fees for her divorce, home improvements, and a snow cone business operated by her children, prosecutors said.

The FBI searched the school and her home in February. FBI agents visited her home again on Tuesday, FBI spokesman Joel Siscovic said.

If convicted, Robinson faces a possible sentence of up to 20 years in federal prison. Robinson would be up for re-election in 2022.

During a news conference, Robinson’s attorney Janika White said federal prosecutors were using a statute to charge Robinson that is “broad and overreaching” and Robinson would be vindicated. White said Robinson is a nurse who has been traveling outside of the state to help treat patients during the new coronavirus pandemic.

Robinson said she will continue serving her district in the Senate “with the same integrity, the same passion that I’ve demonstrated since you’ve elected me to this office.”

“It is believed that if I were not in the position that I’m in, that if I did not champion the voices, the views and the faces that I represent, that I would not be in this moment right now,” Robinson said.

Lt. Governor Randy McNally will be asking the Senate Ethics Committee to look into the “serious criminal charges,” spokesman Adam Kleinheider said in an email.

In a statement, the Senate Democratic Caucus said Robinson’s work in the state Legislature “is not in question” and she “deserves the presumption of innocence and due process.”

According to its website, The Healthcare Institute was founded in January 2015. Its certified nursing assistant program was introduced that July.

The school received a grant from the Health and Human Services Department for a certified nursing assistant program focused on geriatric populations and educational programs. The school also includes phlebotomy and electrocardiographic technician instruction.

An FBI affidavit alleges the federal funds were deposited into the school’s bank account for its operations. The funds were then “commingled indiscriminately with personal expenditure for the benefit of Robinson and her immediate family,” FBI special agent Matthew Pruitt wrote.

The FBI said the department received a complaint from someone who claimed Robinson used the school’s funds to buy a Louis Vuitton handbag for $550.

Robinson also spent thousands on credit card payments, hair and beauty supplies, and improvements to her body aesthetics business and her house, including a wrought iron front door valued at more than $5,000, the FBI said.

Over a four-year period, Robinson paid herself $169,134 more than she was allowed to under salary amounts permitted by the federal grant, the affidavit said.

The criminal complaint details the charges against Robinson and the facts that support the allegations. A federal grand jury will also decide whether to formally indict her.

Robinson isn’t alone in the corruption crackdown among Democratic Party leaders. In Maryland, a former Democratic state lawmaker was sentenced Wednesday to two years in prison for taking bribes for legislative favors, including votes to benefit a medical marijuana company.

Cheryl Glenn, who represented parts of Baltimore as a state delegate, told U.S. District Judge Catherine Blake that she is “profoundly remorseful” and hopes other public officials can learn from her mistakes.

“I truly do believe in the rule of law,” she said.

The judge said Glenn, 69, sold her office to pay her bills and tried to cover up her corruption.

“This was not a one-time lapse. It was not a momentary giving in to temptation. It was a deliberate scheme to take advantage of her political power and misuse her influence and to break the public trust in exchange for money,” Blake said.

Glenn must report to prison by Sept. 21. The judge also ordered her to pay $18,750 in restitution.

Federal prosecutors had recommended a three-year prison sentence for Glenn, who admitted that she accepted five bribes totaling $33,750 over an 11-month period in 2018 and 2019. She instigated the bribery scheme and “monetized her official position,” prosecutors said in a court filing.

“The good she has done has not canceled out the harm,” Assistant U.S. Attorney Leo Wise told the judge.

Defense attorney William Brennan had sought a sentence of probation and home detention.

“I don’t think it’s necessary to incarcerate a person who has otherwise lived an exemplary life,” he said.

Brennan also cited the COVID-19 pandemic as a reason to spare Glenn from prison, saying she has a lung condition that makes her more vulnerable to dangerous symptoms.

In March, Baltimore businessman Lance Andre Lucas, 44, pleaded guilty to bribing Glenn to introduce legislation benefiting a company he worked for; to help a second company obtain a medical marijuana dispensary license; and to help a third company secure a medical marijuana growing license. Lucas hasn’t been sentenced yet.

Glenn served as a state delegate from January 2007 until her resignation in December, days before her charges were unsealed.

The first bribe she took, a $3,000 payment, was in exchange for votes in favor of legislation that increased the number of medical marijuana grower licenses in Maryland from 15 to 22 and capped processing licenses at 28.

“Glenn did this to benefit an out-of-state medical marijuana company that was seeking a license,” prosecutors wrote.

Prosecutors described Glenn as “instrumental” in the creation of Maryland’s medical marijuana industry. The state’s cannabis commission was named after her late mother, Natalie LaPrade.

During a June 2018 meeting with an unidentified businessman at a Baltimore restaurant, Glenn made a “stunningly arrogant statement” in trying to obtain a bribe from him, prosecutors wrote. Glenn said she had created legislation that awarded a company a medical marijuana growing license and that other applicants were “pissed off” and asked, “Who the hell do they know? ’Cause they didn’t have any high-priced lobbyists or anything.”

“I said they know God and Cheryl Glenn,” she told the businessman.

A court filing that accompanied Lucas’ guilty plea described his introduction to Glenn at a May 2018 lunch meeting in Baltimore. After Lucas complained about the costs of seeking a medical marijuana dispensary license, Glenn told him that she would have drafted legislation awarding him a license if he had paid her what it cost to pursue one, the filing says.

Glenn’s corruption wasn’t limited to the medical marijuana industry, according to prosecutors, who said she also took $20,000 in bribes in exchange for requesting the drafting of a bill to create a new liquor license. And, they said, she accepted a $5,000 bribe in exchange for filing a bill lowering the number of years of experience required for a medical director of an opioid clinic.

Prosecutors compared Glenn’s crimes to the corruption cases against two other Democratic officials in Maryland who were sentenced to prison terms.

Prosecutors suggested Glenn was hypocritically asking for what they called a “slap on the wrist” when she used those very words to question why a colleague from Baltimore County wasn’t facing a harsher punishment for failing to fully disclose his ties to a medical marijuana company. The Maryland General Assembly’s Joint Committee on Legislative Ethics recommended a reprimand for Del. Dan Morhaim in 2017.

“He didn’t do anything wrong? Oh, please,” Glenn said, according to a Baltimore Sun article. “It’s incredulous that all he’s getting is a slap on the wrist.”

FLASHBACK: Top Dem accused of $1 million bribery scheme in May