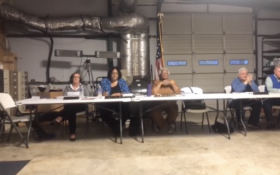 If Democrats have their way, the police will arrest anyone that stands up for the American flag.

That’s at least the case in one North Carolina district. At a recent county meeting, a Democratic official threatened to call the cops on anyone who recited the Pledge of Allegiance.

Louella Thompson, the Board of Elections Chairwoman in Bladen County, North Carolina, reportedly voted with two fellow Democrats to ban the Pledge of Allegiance at meetings recently.

After the vote, those in attendance began reciting the Pledge of Allegiance in protest, joined by the two Republican board members who voted against Thompson’s ban.

Thompson snapped at the protesters.

“I think that was quite out of order,” she said.

“The next meeting, if that happens again, law enforcement will be called because it is against the law to disrupt a meeting that is going on, and that is what happened today with the reciting of the pledge, so be prepared for that,” she said.

The political stunt has sparked controversy throughout the entire state, with officials on both sides chiming in.

Gov. Roy Cooper, a Democrat who appointed Thompson personally, disagreed with the decision to ban the Pledge of Allegiance from the board meeting agenda.

One of his spokespeople told the Bladen Journal: “The Governor leads the Pledge of Allegiance before every Council of State meeting. He doesn’t agree with the action taken and he thinks it’s a good practice to say it before a Board of Elections meeting.”

He, like the rest of the community, was stunned.

“I was appalled that the Chairwoman of the Bladen County Board of Elections will prevent board members — on threat of arrest — from reciting the Pledge of Allegiance,” he said.

“It shows a twisted moral code to oppress the right to honor a flag that stands for freedom from oppression.”

“I stand with the board members who continue to revere and respect our flag and those who lost their lives defending it,” Bishop wrote.

You can watch the stunning video for yourself below: