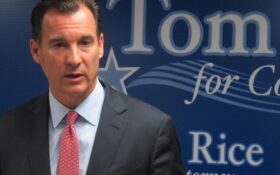 The Campaign Legal Center’s complaint isn’t a small one.

In fact, it includes one Democratic lawmaker, Rep. Tom Suozzi (D-N.Y.), that allegedly failed to file the required reports on approximately 300 stock transactions. Suozzi is a top ally of House Speaker Nancy Pelosi.

Five of the seven sit on the House Financial Services Committee.

Critics say it’s further proof that lawmakers are simply ignoring the nine-year-old Stop Trading on Congressional Knowledge Act (STOCK Act). The 2012 law is supposed to prove that elected officials are not profiting from insider government information.

“The lack of accountability we’ve seen in regard to STOCK Act compliance is basically giving elected officials the green light to buy and sell stocks based on information gained from committee meetings without any transparency for their voters,” Senior Director of Ethics Kedric Payne at the Campaign Legal Center said in a statement.

“The Congressman’s investments are managed through independent advisors with discretion over all transactions,” the spokesperson said. “Every transaction has been reported on his annual financial disclosure and all proper periodic disclosures will be filed on a going forward basis.”

According to the Campaign Legal Center, Suozzi failed to disclose the approximate 300 transactions between 2017 and 2020 – stock sales and purchases worth between $3.2 to $11 million.

Critics have called the STOCK Act ineffectual because it’s so difficult to actually enforce.

“The STOCK Act is pretty much useless,” Sen. Jeff Merkley (D-Ore.) said. “It’s extremely difficult to know when a person in Congress has traded stocks because of information they heard publicly versus information that they’ve heard privately.”

Since it passed almost 10 years ago, no lawmaker in the House or Senate has received formal punishment for violations of the STOCK Act.