Defund Planned Parenthood and save HOW much!? - The Horn News 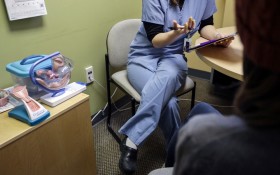 The estimate by the nonpartisan Congressional Budget Office comes as Republicans are pushing for the cut in the wake of videos that show Planned Parenthood representatives discussing how the group provides fetal tissue for research.

The House plans a vote this week on legislation that would block Planned Parenthood’s federal money for a year. Lawmakers could approve an amendment shifting the money to other women’s health care providers. If approved, the savings would be expected to disappear and the number of people with diminished access to health care could well be lower than the budget office’s figures.

The CBO said its projected $235 million in savings was at the center of a range of estimates it prepared.  The actual savings could be far greater.

The budget office estimated that Planned Parenthood receives about $450 million annually in federal funds, including $390 million in reimbursements from the Medicaid program for low-income people.

About one-third of Planned Parenthood’s annual $1.3 billion budget comes from taxpayers. The rest is from private sources and revenue it generates from its services.

Democrats have blocked a Senate GOP bill halting payments to Planned Parenthood. President Barack Obama would be all but certain to veto such legislation if it reached him.