Defense: Bowe Bergdahl had a tough childhood - The Horn News 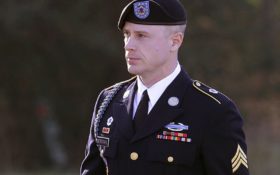 Dr. Charles Morgan, called as a defense witness at Bergdahl’s sentencing hearing, said the soldier was already suffering from a schizophrenia-like disorder and post-traumatic stress disorder when he disappeared in Afghanistan.

Morgan, a forensic psychiatrist and defense consultant, said interviews with family and friends from Bergdahl’s childhood, as well as a lengthy exam with Bergdahl, convinced him the soldier was suffering from schizotypal personality disorder when he disappeared in Afghanistan. He said his findings were consistent with a brief Army Sanity Board document that previously made the diagnosis public.

On the stand, Morgan went into much greater detail than what was previously disclosed about Bergdahl’s mental health. He said Bergdahl has an internal, self-critical commentary that he doesn’t recognize as his own thoughts. He also said he engages in fantasy and has thoughts of self-castration to purify himself.

Bergdahl and others with the disorder “have this experience of their own inner life as if it’s not them,” Morgan said. He said the internal commentary manifests in thoughts such as: “You’re never going to be good enough.”

However, Morgan said the commentary isn’t an auditory hallucination, and Bergdahl isn’t psychotic. He said Bergdahl knew right from wrong when he walked off his post.

Still, the disorder makes it difficult for Bergdahl to see the second- and third-order effects of his actions and how they will impact other people, Morgan said.

Morgan believes Bergdahl had post-traumatic stress disorder even before he enlisted in the Army in 2008 because of his childhood with a quick-tempered father. Symptoms of anxiety and tunnel vision, sometimes present when he interacted with his father growing up, occurred the night Bergdahl had a 2006 panic attack at Coast Guard boot camp that caused him to be discharged, Morgan said.

Bergdahl’s father believed in corporal punishment and punched holes in the walls when he was angry, Morgan said. Growing up, Bergdahl would sometimes hide when he heard the sound of his father’s truck pulling up to their house in Idaho.

Bergdahl has said he walked off his remote post in Afghanistan in 2009 without authorization intending to reach another base and describe what he saw as problems with his unit to another commander.

Morgan testified that kind of action was consistent with the schizotypal personality disorder diagnosis.

“I think he believes there are times if it’s the morally right thing to do, you have to break the rules,” he said. “There’s not a thinking through of: ‘Are there other ways to achieve this goal?’”

Since the defense began its sentencing arguments, Bergdahl has taken the stand to apologize to the troops who were wounded in the search for him. And two military agents who debriefed Bergdahl testified Tuesday about how much valuable intelligence he provided when he was returned in a prisoner swap.

Prosecutors presented evidence that the wounds to the troops who searched for him merit stiff punishment. Bergdahl faces up to life in prison. The military judge hearing the case has wide discretion on his punishment because Bergdahl didn’t strike a plea agreement with prosecutors when he admitted to desertion and misbehavior before the enemy.

Morgan was scheduled to be questioned by prosecutors Wednesday afternoon. Closing arguments are expected later this week.

On Monday, Bergdahl began the defense’s sentencing presentation by taking the stand to apologize to those wounded searching for him. He also described the brutal conditions he faced in five years of captivity by Taliban allies, including beatings with copper wire and unending bouts of gastrointestinal problems brought on by squalid conditions. He said he was kept in a cage for four of years in captivity after several escape attempts. He said his muscles became so weak he could barely stand or walk.

The 31-year-old soldier from Hailey, Idaho, was brought home by President Barack Obama in 2014 in a swap for five Taliban prisoners at Guantanamo Bay. Obama said at the time the U.S. does not leave its service members on the battlefield. Republicans roundly criticized Obama, and Donald Trump went further while campaigning for president, repeatedly calling Bergdahl a “dirty, rotten traitor” who deserved to be executed by firing squad or thrown out of a plane without a parachute.