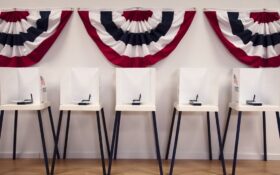 For the first time since 1987, deep blue Oregon could be on the verge of voting for Republican Party control of its state government.

The would-be governors clashed Tuesday over gun control, abortions, and other hot-button issues at an in-person debate, just six weeks before election day.

Although registered Democratic voters in Oregon outnumber Republicans by 1 million to 729,000, there are also 1 million registered voters claiming no party affiliation. Which way they swing come Nov. 8 could be decisive in whether a Republican will be Oregon’s governor for the first time since 1987.

Independent candidate Betsy Johnson is playing spoiler to Kotek, and is polling at over 20 percent.

At the debate in Bend, Oregon, Kotek was alone in saying she would support a gun-control measure that has received enough voter signatures to get on the November ballot. Johnson and Drazan said they oppose it. The measure would require people wanting to purchase a gun to first qualify for a permit and is one of the strictest gun-control measures in the nation.

Johnson said the measure would unduly burden rural police departments. Applicants would apply for the permit from the local police chief, county sheriff or their designees. But Johnson said she would support raising the minimum purchasing age for certain weapons from 18 to 21.

The high number of people in Oregon who are homeless and the high cost of housing was also a point of contention among the candidates at the debate venue, Oregon State University-Cascades.

Drazan blames Kotek and Johnson, a former veteran lawmaker, for the homeless crisis.

In a Fox News interview earlier this week, Johnson disparaged Kotek as “tent city Tina” due to widespread homelessness that has blighted parts of Portland.

Drazan complained about taxes that have been imposed in recent years in Oregon and said “we’ve got to be serious about holding the line on new taxes.”

It was the second televised debate for the three candidates, with Democrats lacking a lock on this race. Two national election-watching groups rated the race as a toss-up.