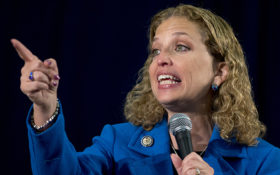 Florida Rep. Debbie Wasserman Schultz has long been criticized as one of the dirtiest, most corrupt Democratic insiders operating in Washington, D.C.

In it, Wasserman Schultz is seen in a tense exchange with the D.C. Capitol police chief, and ends with Wasserman Schultz threatening “consequences” if he doesn’t surrender evidence that she claims belongs to her.

“The Florida lawmaker used her position on the committee that sets the police force’s budget to press its chief to relinquish the piece of evidence Thursday, in what could be considered using her authority to attempt to interfere with a criminal investigation,” The Daily Caller reported.

The video seems to show Wasserman Schultz is desperate to get it back.

“If a Member loses equipment and it is found by your staff and identified as that member’s equipment and the member is not associated with any case, it is supposed to be returned. Yes or no?” Wasserman Schultz asked Capitol Police Chief Matthew Verdersoa during the House Committee On Appropriations’ Legislative Branch Subcommittee meeting.

Wasserman Schultz is a member of the committee, which was meeting to debate the Capitol Police’s annual budget.

According to The Daily Caller, “The laptop was … found by Capitol Police and seized because it was relevant to the criminal investigation” into a family of five Pakistani nationals suspected of using their position as congressional IT staff to steal sensitive data from the House of Representatives.

These former IT staffers, who were employed by dozens of Democratic lawmakers, are also suspected of being connected to Iraqi politicians that allegedly funneled them hundreds of thousands of dollars.

The Horn News first reported on this shocking criminal investigation in February.

“My understanding is the Capitol Police are not able to confiscate Members’ equipment when the Member is not under investigation,” Wasserman Schultz tells Verdersoa.

“I think you’re violating the rules when you conduct your business that way — and you should expect that there will be consequences,” Wasserman Schultz then warns.

The IT staffers in question were paid over $4 million by dozens of House Democratic offices for their services between 2009 and March of this year.

Despite being under serious criminal investigation and having been banned from using the Congressional computer network in February, it took over a month for multiple Democratic lawmakers — including Wasserman Schultz — to finally remove the accused staffers from payroll because of their “friendly personal relationships,” according to Politico.

At least one of the five suspects has since fled to Pakistan and is currently living under VIP protection. For years, the family’s high salaries baffled technology aides, who frequently complained the five were not highly competent.

Wasserman Schultz has refused to comment on her “strong desire” for the laptop.