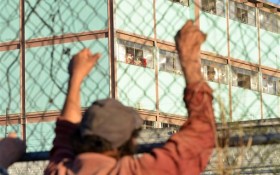 A brawl between rival drug gangs at an overcrowded penitentiary in northern Mexico turned into a riot Thursday, leaving 52 inmates dead and 12 injured in the country’s deadliest prison melee in years.

No escapes were reported in the clash at the Topo Chico prison in Monterrey, said Nuevo Leo state Gov. Jaime Rodriguez. The riot took place on the eve of Pope Francis’ arrival in Mexico, a visit that is scheduled to include a trip next week to another prison in the border city of Ciudad Juarez.

The fighting began around midnight with prisoners setting fire to a storage area, sending flames and smoke billowing into the sky. Rescue workers were seen carrying injured inmates — some with burns — from the facility.

Rodriguez said the clash was between two factions led by a member of the infamous Zetas drug cartel, Juan Pedro Zaldivar Farias, also known as “Z-27,” and Jorge Ivan Hernandez Cantu, who has been identified by Mexican media as a Gulf cartel figure.

A turf war between the gangs bloodied Nuevo Leon state and neighboring Tamaulipas between 2010 and 2012. The Zetas once nearly controlled the area around Monterrey.

Zaldivar Farias was a suspect in the 2010 killing of American David Hartley on Falcon Lake, which makes up part of the border between Mexico and Texas. Hartley was reportedly gunned down while touring the reservoir with his wife on jet skis.

A crowd of people bundled against the cold gathered at the prison gates, demanding to be let in to learn the fate of their relatives. Some kicked and shook the gates as riot police with plastic shields kept the crowd out.

“They haven’t told us anything,” said Ernestina, who identified herself as the mother of an inmate but declined to give her full name for fear of reprisal. “They said that until there is order, they won’t let us in. Everything is in disorder, and nobody is telling us anything.”

Authorities were reinforcing security at other prisons and had transferred some inmates out of Topo Chico, Rodriguez said in an interview with Milenio Television.

A month earlier, 31 died in a Tamaulipas prison where inmates set upon each other with makeshift knives, clubs and stones.

According to a 2014 report by the National Human Rights Commission, Topo Chico was designed to house 3,635 prisoners but actually held about 4,585 that year. Inmates there used violence as a way of exerting control in the prison, it added.

Another report by the commission in 2013 highlighted violence and inmate control in many of Mexico’s prisons, symptoms of corruption and lack of resources.

The report, based on visits and interviews at 101 of the most populated facilities, found that 65 of them were run by inmates, not authorities.