Day 3 of the impeachment saga: What you missed - The Horn News 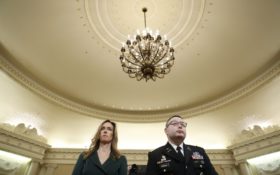 A career Army officer. A career foreign service official. Both had a consistent message during Day 3 of the House impeachment inquiry, and each went on the attack against President Donald Trump over his phone call with the president of Ukraine.

Here are some takeaways from the hearing:

“CONCERNED BY THE CALL”

The two Democrat-selected witnesses in Tuesday morning’s session each listened to the July 25 phone call in which Trump prodded his Ukrainian counterpart to investigate Democratic rival Joe Biden.

Jennifer Williams, a senior adviser to Vice President Mike Pence, said she considered the call “unusual” since it “involved discussion of what appeared to be a domestic political matter.”

Alexander Vindman, an Army lieutenant colonel described by critics as a career Democrat, went even further in describing his firsthand concerns. He considered it “improper,” and, acting out of “duty,” reported his alarm to the chief lawyer for the National Security Council.

He sought to pre-empt any Republican arguments that he had political or partisan concerns in mind, pointedly noting that he conveyed his concerns privately and through the right channel.

“I privately reported my concerns, in official channels, to the proper authorities in the chain of command. My intent was to raise these concerns because they had significant national security implications for our country,” Vindman said.

The White House and Republican allies sought to undermine the credibility of Vindman by casting him as a disgruntled aide.

Vindman is a naturalized American citizen who was three when his family fled Ukraine, then a Soviet republic. In October 2004, not long into his yearlong tour in Iraq, he was wounded by a roadside bomb and awarded the Purple Heart.

Under questioning from GOP impeachment counsel Steve Castor, Vindman revealed that he was offered the post of Ukraine’s defense minister three times but rejected the suggestion.

He said he was made the offer while attending the inauguration of Ukrainian President Volodymyr Zelenskiy as part of the official U.S. delegation. Vindman added, “I immediately dismissed these offers.” He says two American officials witnessed the exchange with a top adviser to Zelenskiy, and that he notified his chain of command and counterintelligence officials about the offer upon returning to the U.S.

Castor questioned whether that created the impression of a conflict, to which Vindman replied, “it’s more important what my American chain of command thinks.” He added: “The whole notion is rather comical.”

Republicans also tried to raise concerns from some in the NSC that Vindman might leak information. Tim Morrison, the NSC senior director for Russia and Europe. told Republicans in a closed-door deposition that others at the White House had raised concerns that Vindman potentially leaked information. Morrison also said that senior NSC official Fiona Hill had “raised concerns about Alex’s judgment” as the two discussed the strengths and weaknesses of their team.

Pence has been portrayed largely as out of the loop about Trump’s request that Ukraine investigate Biden. The public testimony by Williams is refocusing attention on what the Pence knew and when about the events that sparked the House impeachment investigation.

Williams, a career foreign service officer who was detailed to Pence’s office from the State Department, compiled briefing materials for Pence on Ukraine, was in the room when he met with Ukrainian President Volodymyr Zelenskiy in September and was among the staffers in the Situation Room who listened and took notes during Trump’s July 25 call with Zelenskiy.

Katie Waldman, a spokeswoman for Pence, notes her current appointment began on April 1, and says, “she doesn’t directly report to the Vice President.”

To that end, Pence failed to come to Williams’ defense when Trump fired off a tweet over the weekend saying she should meet with “the other Never Trumpers, who I don’t know & mostly never even heard of, & work out a better presidential attack!”

She declined in her testimony to answer questions about the vice president’s September call with Zelenskiy on the grounds that it remains classified. She said she would instead submit a classified memo about the call as part of the impeachment investigation.

Williams told the committee behind closed doors this month that the call was “very positive” and the two men did not discuss Trump’s push for investigations of Democrats. Pence’s office has so far declined to release the transcript.

The White House reacted to the substance of the impeachment inquiry in real time Tuesday, stepping up its engagement after facing persistent complaints from Republican allies that it wasn’t doing enough to counter the allegations against the president.

The White House sent out five “rapid response” emails to reporters before the witnesses were even sworn-in for Tuesday’s open hearing, and the notes continued throughout the proceedings. The messages at once sought to defend Trump and undermine the credibility of the witnesses before the committee.

“The President of the United States determines American foreign policy – not unelected bureaucrats,” said one email, as the White House argued that the career officials testifying had a policy dispute with Trump about Ukraine. “It’s the job of bureaucrats to implement that agenda set by the President – not leak and undermine him at every turn.”

“Williams’ prior testimony offered nothing but personal opinion and conjecture over a call that all Americans can see for themselves was perfectly appropriate,” the White House said.

The White House is also attacking Vindman, saying he “has faced accusations of poor judgement, leaking, and going around normal procedures.”

Efforts to push back on the proceedings in real-time were to begin last week, but were stymied Friday after President Donald Trump tweeted out an attack on another witness, former Ambassador to Ukraine Marie Yovanovitch.

The  Associated Press contributed to this article