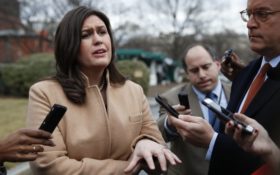 The White House said Monday that Cabinet members are delaying their departure for this year’s World Economic Forum meeting in Davos, Switzerland amid the federal government shutdown.

Spokeswoman Sarah Huckabee Sanders said they will determine what to do “as the day goes on and as we see how the next couple of hours go.”

Treasury Secretary Stephen Mnuchin is leading a delegation of Cabinet members and top aides to the glitzy summit in the Swiss Alps. He was scheduled to leave Monday, with President Donald Trump following later in the week.

Trump planned to bring his “America First” message to the conference, a gathering of global political and business elites which has rarely been attended by recent sitting presidents.

Asked if Trump would attend if the government is still shutdown, Sanders said: “I don’t know that that’s very likely. I wouldn’t imagine it is. Our priority is making sure that the government reopened and we start having the conversations that need to take place over the next couple of weeks.”

One member of the delegation, FDA Commissioner Scott Gottlieb, stressed on Twitter Monday that he was not traveling. He said on Twitter: “I’m in White Oak, MD today at #FDA headquarters. I did not travel to Davos today as previously planned.”

Secretary of State Rex Tillerson won’t travel to Davos if the government is still shut down, said Undersecretary of State Steve Goldstein, adding that the decision would likely be made Wednesday. In that case, Tillerson, who is traveling in Europe, would return to Washington, meaning he would also cancel a planned post-Davos stop in Warsaw, Poland.

He added that “if this continues to drag on it will become more difficult to find more ways for the president to get there too.”