Daughter of JFK makes her presidential endorsement - The Horn News 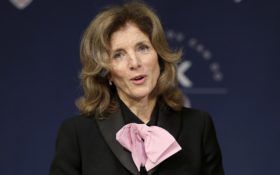 The Kennedy family has been a major force in Massachusetts politics for generations, and Caroline Kennedy’s sought-after endorsement came the day that the 2020 Democratic contest landed in neighboring New Hampshire, which holds its presidential primary next week.

Kennedy, a former ambassador to Japan, announced her decision to endorse Biden in an opinion article in The Boston Globe.

“We need a nominee who can compete in every state, who can bring wandering Democrats and independents back to the fold, and even attract some Republicans,” Kennedy wrote. “Biden at the top of the ticket is our best bet to win the White House, keep the gains we made in the House, and put the Senate in play.”

Kennedy’s endorsement of Biden came before there was a declared winner in Monday’s Iowa Caucuses, which devolved into chaos because of technical problems with an app that was supposed to be used to report results.

Kennedy said that President Donald Trump has been a destructive force and “shredded our credibility around the world.”

Biden, she wrote, would be a calming presence who could “bring people together, who knows how to get things done at home and abroad, whose word we can count on, and who can nurture the next generation of leaders.”