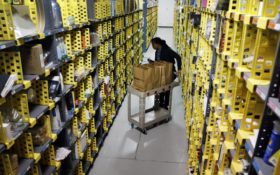 After offering online deals for days, retailers are rolling out even more promotions for Cyber Monday, hoping to keep people buying stuff on their smartphones or computers.

Shoppers are expected to spend $6.6 billion on Cyber Monday, up more than 16 percent from a year ago, according to Adobe Analytics, the research arm of software maker Adobe. And more people will be picking up their phones to shop: Web traffic from smartphones and tablets is expected to top desktop computers for the first time this year, Adobe said.

At the MacArthur Center shopping mall in Norfolk, Virginia, on Sunday, Kathy Lewis was there not to shop but to get her nails done. Her plan is to make her big purchases on Cyber Monday, including the newest model Nerf gun for her boyfriend’s nephew. Lewis said she gave up years ago on waiting in line at Toys R Us.

“It’s so hard to get in and out of there to me,” she said. “If you look online, you get the same price you get on Black Friday.”

Lewis did brave a very crowded Best Buy on Friday in search of a 32-inch television for another of her boyfriend’s relatives. But after checking the price, she’s holding off for Monday. Her plan is to scan the websites of Toys R Us, Best Buy and Amazon before making her final decision.

As part of their Cyber Monday deals, Target and Toys R Us are offering 15 percent off most items on their sites. Walmart.com has tripled the amount of items available for sale from last year. And Amazon — which Bain & Co. says is expected to capture 50 percent of all online sales growth — will offer similar deals on its gadgets as it did on Black Friday, but offer new deals on Lego sets and Hasbro games.

The shift to online shopping has been noticeable at some stores since the holiday shopping season kicked off. At a Toys R Us in Toledo, Ohio, on Friday morning, the parking lot was about half full. Melissa Wetzel, who said she would also do some shopping online, said her Black Friday in-store shopping runs had been relaxing since she didn’t have to fight the crowds.

“It’s been pretty easy,” she said. “I guess most are shopping online.”