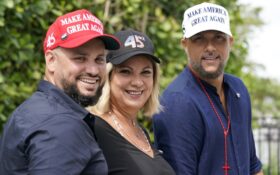 On the spur of the moment, a singer in a Cuban salsa band had an idea for a lyric to please fellow Trump supporters at a Miami birthday party.

Tirso Luis Paez flicked his hand so his band mates would let him take over during a crowd favorite, “Cuba is Me,” and instead of singing the usual chorus, he belted out: “Yo voy a votar, por Donald Trump!”

The seemingly spontaneous moment with Los 3 de la Habana was live-streamed and soon viewed by tens of thousands. The Trump campaign quickly featured it in a national ad projecting Miami Cuban enthusiasm for the Republican leader to Latino markets across the country. An English language version, “Oh my God I will vote, I will vote for Donald Trump,” spread online as well.

Florida’s Cuban American voters remain a bright spot in Trump’s effort to retain his winning coalition from 2016. Polls show his strong support from these key voters may even be growing to include the younger Cuban Americans that Democrats once considered their best hope of breaking the GOP’s hold. For Trump, that support could prove essential in a tight race in a state he must win to beat Democratic challenger Joe Biden.

In the past four years, Trump has courted with these voters by undoing former President Barack Obama’s Cuba engagement policy, sanctioning Latin-American socialist governments and misleadingly casting all Democrats as leftists and anti-capitalists.

“Anything that smells like socialism to us, the slightest thing already makes us sick. We start shaking,” said Paez, who like many exiled Cubans accuses the island’s Communist leaders of oppressing its people and failing to lift them out of poverty.

“Many people could identify with us in that video,” Paez said.

Miami-Dade is where more than 40% of Cuban Americans live, and while the population includes more than 1.5 million Hispanics of voting age, they have an outsized influence over other Latino groups in the city.

Caravans have become a common sight in Miami as Election Day approaches, with hundreds of cars in Hispanic neighborhoods blasting horns, blaring Latin music and cheering for Trump. They offer a stark contrast to pandemic gloom, often looking like victory parades, and the band has joined in, sharing a stage with Ivanka Trump and a boat ride with Eric Trump. Their song has been kept on a loop outside an early voting station in the Cuban American stronghold of Hialeah, where supporters waved American and Blue Lives Matter flags alongside a cardboard cutout of the president.

Democrats had been banking on younger Cuban Americans to be more open to warming ties with the island, even if older exiles remain staunchly opposed. Obama’s appeal to young voters helped him carry Florida in both 2008 and 2012.

A Florida International University poll of Cuban Americans in Miami-Dade County released this month shows Trump leading Biden 59% to 25%. The same poll showed Trump leading among young Cubans, unlike in 2016, and the GOP gaining three out of four new arrivals from the island between 2010 and 2015 who registered to vote.

Priorities USA, the largest Democratic super PAC, has released ads featuring a prominent exiled Cuban author saying Trump styles himself after Benito Mussolini and Augusto Pinochet. Another ad, by The Lincoln Project of anti-Trump Republicans, accuses him of acting like a dictator and says “Trump is just English for Castro.”

And on Thursday, while both Biden and Trump were campaigning in Florida, the former vice president attacked the Trump administration for increasingly denying asylum to people fleeing dictatorships in Cuba and Venezuela. Biden said that if Trump had been president when generations of Cubans first came to the U.S. fleeing Fidel Castro, “in the old days, they wouldn’t be here.”

Guillermo Grenier, who leads the FIU Cuba Poll, argues that these efforts may be too late, after the Biden campaign seemed to have given up on Cuban Americans, courting Florida’s Puerto Rican and Black voters instead.

“There is no Democratic plan or beachhead to swing Cubans over to the Democratic side,” Grenier said.

Trump’s criticism of Black Lives Matter protests that have sometimes sparked vandalism and violence resonates in Miami, where many Cubans said they were triggered by hammer-and-sickle graffiti sprayed on a city monument during protests in June over George Floyd’s death.

When Miami public schools proposed increasing anti-racism teaching over the summer, the district was swamped with hundreds of calls, many from Cuban Americans concerned about “indoctrinating” children with strains of Marxist thought. A Cuban exile compared violent demonstrators to Nazis in an ad published by The Miami Herald.

Edgard Lopez, a 43-year-old voter who arrived in Miami as a Cuban refugee a decade ago, said he opposes Biden’s call for more “community-oriented” policing.

“We come to this country seeking law and order. In our country that does not exist, and that is now under threat,” said Lopez, who said he was harassed in Cuba for his work as a member of the opposition.

Lopez said Trump’s blunt style is popular among Cuban Americans and he praises Trump’s economic record, saying he’s been better off under this administration working as a chef.

Democrats warn that Trump’s efforts to overturn Obama’s health care law could hurt Cuban Americans in particular, since Miami-Dade County has the nation’s highest number of people enrolled in its health plans.

“Many Cuban voters are the greatest beneficiaries of the Affordable Care Act, and they are voting to destroy and eliminate it,” said Fernand Amandi, a Democratic pollster.

The musicians of Los 3 de la Habana say Trump’s economic and foreign policies have been his main achievements. Ana Pinelli Paez, Tirso’s mother and fellow band member, remembers when they survived on only red beans, plantains and bread before leaving Cuba in 2007. She likes that Trump focuses on regular people, she said, “and he prioritizes Americans.”