Cuba embargo loosened – here's what has changed - The Horn News 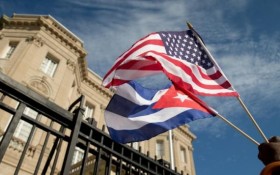 The Obama administration is loosening the U.S. trade embargo on Cuba with a new round of regulations allowing American companies to sell to Cuba on credit and export a limited number of products to the Cuban government.

Tuesday’s announcement is President Barack Obama’s third attempt to spur U.S.-Cuba commerce despite an embargo that still prohibits most forms of trade with Cuba. U.S. travel to Cuba has exploded since Obama and Cuban President Raul Castro declared detente in 2014. U.S. hopes of building wider trade between American businesses and Cuba’s private sector have been largely frustrated.

Among a host of other measures, the new regulations allow U.S. firms to offer Cuban buyers credit on sales of non-agricultural goods, addressing a longstanding Cuban complaint about a ban on credit.