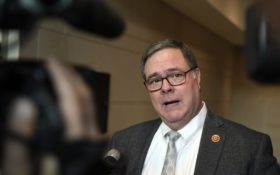 In announcing his retirement, Heck said impeachment broke him.

His work on the investigation into Russian election interference and the impeachment of President Donald Trump has “rendered my soul weary.”

Critics say the move makes sense, given the fact that impeachment inquiry has imploded.

Heck took aim at his Republican colleagues during his retirement announcement. His official statement said, “I will never understand how some of my colleagues, in many ways good people, could ignore or deny the president’s unrelenting attack on a free press, his vicious character assassination of anyone who disagreed with him, and his demonstrably very distant relationship with the truth.”

Heck, 67, now in his fourth term, has been the only representative of Washington’s 10th District since it was created in 2012. The district, southwest of Seattle, encompasses the state capital of Olympia and is considered reliably Democratic.

Heck said he had relished much of the work he did in Congress, including serving on the House Intelligence Committee, trying to protect Puget Sound from pollution, and helping a soldier receive a Purple Heart after authorities overlooked his injuries. He even enjoyed being one of the House’s foremost experts on monetary policy, he said.

Heck sponsored legislation that the House passed with bipartisan support this year to grant legal marijuana businesses access to banks.

But the work took its toll, and with the Intelligence Committee’s duties on the impeachment inquiry largely concluded, he took time over the Thanksgiving break to reflect on his future. Heck said he wanted to spend more time with his wife of 44 years, Paula, noting that “however many ‘good years’ we have left together is not a growing number.”

He also said he was discouraged by the state of politics but that dismay did not diminish the gratitude he felt for serving in Congress.

In written statements, House Speaker Rep. Nancy Pelosi, D-Calif. called Heck “a leader of outstanding integrity and character,” and Washington Gov. Jay Inslee said the congressman “has fought hard for a strong democracy, been a powerful voice at the national level and is never afraid to do what’s right.”

Rep. Dan Newhouse, a Republican from central Washington, praised Heck’s bipartisan approach. Newhouse said he was proud to have worked with Heck on issues important to the state, including reauthorizing the Export-Import Bank and returning a 9,000-year-old skeleton dubbed “The Ancient One” to local Native American tribes.

Born in Vancouver, Washington, Heck was a state lawmaker who was first elected to office at 24. He later served as chief of staff to then-Gov. Booth Gardner from 1989 to 1993.

He co-founded TVW, Washington state’s public affairs television network, in 1993, and he launched Intrepid Learning Solutions, a digital learning company that has grown from two employees to more than 300. He was an early investor in the gaming and streaming media company RealNetworks.

After running unsuccessfully in Washington’s 3rd Congressional District in 2010, Heck was elected to represent the newly created 10th District in 2012. Voters last returned him to office in 2018 with 61.5% of the vote.

Heck, who declined to endorse some priorities of progressive Democrats, including the Green New Deal and Medicare for all, had faced one 2020 challenger so far: Joshua Collins, a 26-year-old truck driver and Democratic Socialist. Collins supports those plans, as well as giving everyone free access to college and “taxing billionaires out of existence.”

"You're the best of this nation." – Rep. Denny Heck #ImpeachmentHearings pic.twitter.com/ECpVhBgHMd