Cruz: Trump too scared to debate - The Horn News 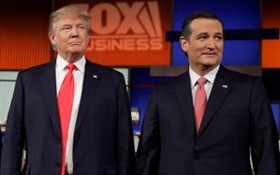 It started as a bromance, then devolved into a war of words.

Wednesday, Cruz took to the airwaves to again blast Trump over his decision to skip Thursday’s presidential debate, and repeated his challenge to a one-on-one contest.

And Cruz is launching a narrative that Trump is scared to face him and his GOP rivals, despite Trump’s enthusiastic participation in previous debates.

Taking to Twitter, Cruz asked his supporters to push Trump towards the debate, saying:

Trump, who earlier this week announced his plans to skip Thursday’s night’s GOP debate amid a feud with debate host Fox News Channel, had his own Twitter message for Cruz:

Even though I beat him in the first six debates, especially the last one, Ted Cruz wants to debate me again. Can we do it in Canada?

Undaunted, Cruz continued his attacks at a rally Wednesday, where he told gathered supporters that “it’s not really that Donald is afraid of me. He’s afraid of you. He doesn’t want to answer questions from the men and women of Iowa about how his record doesn’t match what he’s selling.”

“We’ll do 90 minutes, Lincoln Douglas, mano a mano. Donald and me. He can lay out his vision or this country, and I can lay out my vision for this country in front of the men and women of Iowa,” Cruz said of the debate.

He also took to Twitter earlier in the day to call Trump a coward with the following message:

Rallying behind their candidate, two super PACs supporting Cruz’s presidential campaign are offering to donate $1.5 million to charities that help veterans if Trump accepts the debate.

The political action committees – Keep the Promise I and II – are proposing a one-hour debate to be held in Iowa on or before Jan. 31, the day before the caucuses, with a moderator chosen by the candidates.

The Trump campaign responded by telling ABC News, “If he’s the last man standing and it comes down to a two-person race Donald Trump will be happy to debate him.”