Cruz: Trump is working for Hillary - The Horn News 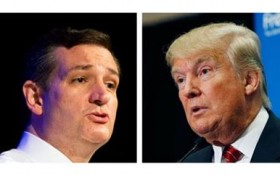 After weeks of facing accusations about his eligibility to be president, Texas Sen. Ted Cruz is fighting back against billionaire Donald Trump with a conspiracy theory of his own.

Cruz seems to be trying to renew chatter that Trump is a plant meant to help Hillary Clinton win the election — or, at the least, that Trump is benefiting Clinton’s campaign.

The conspiracy theory that Trump is a Democratic plant — and perhaps not genuinely a Republican — began shortly after Trump announced his campaign. As an independent businessman, Trump had previously donated to Clinton’s Senate campaigns and to the Clinton Foundation. And long-time Trump observers say they have been surprised by the hard right turn he has taken in his presidential campaign.

Trump has explained his previous support of Democratic candidates as part of doing business in left-leaning New York, and has admitted that some of his positions on issues like abortion have evolved over the years. And as Trump has risen in the polls to become a serious challenger to Clinton, most of the talk that Trump and the Democrats were in cahoots seemed to die down.

But now Cruz appears ready to give it another spark.

Cruz began raising the issue Tuesday while questioning Trump’s “New York values” and his close association with liberals. In particular, Cruz questioned whether, on the issue of Cruz’s eligibility, Trump was getting advice from leading Democrats.

“It’s more than a little strange to see Donald Trump is relying on as authoritative a liberal left-wing judicial activist Harvard law professor who is a huge Hillary supporter,” said Cruz, referring to the fact that Trump has repeatedly cited professor Laurence Tribe on the issue of Cruz’s eligibility.

“It starts to make you think, gosh, why are Hillary’s strongest supporters backing Donald Trump? The past couple of elections we saw the Democrats thrilled that they got the nominee they wanted to run against in the general election,” Cruz said. “The Hillary folks are very eager to support Donald Trump.”

Speaking to radio host Howie Carr, Cruz continued the attacks, subtlety raising questions about Trump’s values. “Donald comes from New York and he embodies New York values,” Cruz said, adding that “The Donald seems to be a little bit rattled” over his position in the polls, suggesting Trump may not have expected (or intended) to do as well as he has.

The final shot came when radio host Hugh Hewitt asked Cruz about the nuclear triad. During the last GOP debate, Trump had appeared stumped by a question on the topic.

“Well, I do think the most important determination that the voters are making is who is prepared to be commander in chief, who has the knowledge, who has the experience, who has the judgment and clarity of vision and strength and resolve to keep this country safe. And it is certainly relevant to voters. Does a potential commander in chief know what the nuclear triad is, much less is he or she prepared and able to strengthen it and keep this country safe?” he said.

Trump, meanwhile, hit back at a rally in Cedar Falls, IA on Tuesday night, again raising questions about Cruz’s ability to run.

“He’s got a problem,” Trump told an audience packed into a gym of the University of Northern Iowa, repeating his case that the issue will hang over Cruz’s head if he wins the nomination. “I’m doing it for the party, and I’m doing it for Ted,” Trump later said.