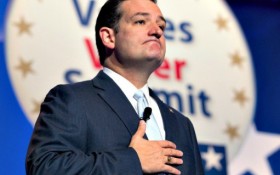 After being demolished in last night’s New York primary, it is officially impossible for Texas Sen. Ted Cruz to earn enough delegates to win the GOP presidential nomination outright.

But with Cruz still hoping to steal the nomination in a so-called brokered convention, don’t expect his campaign to be talking about his delegate math problems any time soon.

Cruz was humiliated in New York, where he finished a distant third to billionaire Donald Trump and Ohio Gov. John Kasich. More importantly, he failed to win a single delegate.

Trump won at least 89 of the 95 delegates at stake. John Kasich won at least three, and Cruz was completely shut out.

And that poor performance mathematically eliminated Cruz from being able to accumulate enough delegates to head to the Republican National Convention as the party’s presumptive nominee.

If the process was being run fairly, Cruz and Kasich would be out and headed home.

There aren’t enough delegates left in future contests for either Cruz or Kasich to reach the 1,237 delegates needed to win the GOP nomination.

Their only hope is to block Trump and force a contested convention. The total delegate count stands as: Trump 845, Cruz 559, and Kasich 147.