Cruz promises he can beat Trump - The Horn News 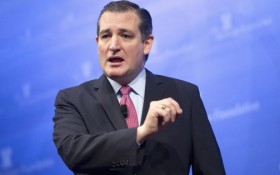 Appearing before a receptive crowd at the Conservative Political Action Conference (CPAC) Friday, Texas Sen. Ted Cruz pushed back against the brokered Republican convention idea being floated by some party insiders as a way to stop frontrunner Donald Trump.

He went on to make an explicit pitch to the crowd that he was the only viable GOP candidate left besides Trump who can win the delegate math, and no matter who voters supported at the start of the election cycle, it was time for the anti-Trump voter to choose him.

Cruz trails Trump in the delegate count heading into Super Saturday, 329 to 231. Of the other remaining candidates, Sen. Marco Rubio has 110 and Ohio Gov. John Kasich has 25.

It takes 1,237 delegates to win the Republican nomination.

“Maybe you supported Rand Paul, or Jeb Bush or Chris Christie, or have been with Marco Rubio or John Kasich, or maybe Carly Fiorina. They are all good, honorable people – and everyone of them is a thousand times better than Hillary Clinton,” who Cruz warned is best benefited by a GOP nomination of Trump.

“As dire as thing are, people are waking up all over this country. And help is on the way,” Cruz said to wild cheers.