Cruz admits he is relying on brokered convention - The Horn News 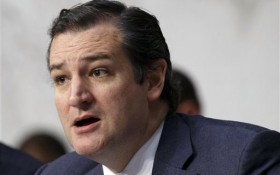 The messy fight for the Republican presidential nomination is shifting to a luxury seaside resort in south Florida as Donald Trump and chief rival Ted Cruz quietly court party leaders ahead of another set of high-stakes delegate contests.

Cruz conceded publicly for the first time that he doesn’t have enough support to claim the nomination before the party’s summertime national convention, but he also vowed Wednesday to block Trump from collecting the necessary delegates as well. The Texas conservative predicted a contested convention that many party loyalists fear could trigger an all-out Republican civil war.

“What’s clear today is that we are headed to a contested convention,” Cruz told reporters in between private meetings with Republican National Committee members gathered at the Diplomat Resort & Spa for the first day of their three-day annual spring meeting.

Campaigning in Indiana, Trump railed against his party’s leadership, even as his senior lieutenants courted GOP officials behind closed doors in Florida.

“It’s a rigged, crooked system that’s designed so that the bosses can pick whoever they want and that people like me can’t run and can’t defend you against foreign nonsense,” Trump charged at the Indiana State Fairgrounds.

Roughly at the same time, Trump’s newly hired political director, Rick Wiley, was hosting a series of private meetings at the Florida resort with party officials from states set to vote in the coming weeks. The veteran political operative, who previously worked for the RNC, is tasked with helping Trump play catch-up in the complicated state-by-state nomination process.

Trump’s top aides were set to deliver a private briefing to RNC members Thursday afternoon outlining his path to victory.

Both Trump and the Democratic front-runner, Hillary Clinton, were pushing ahead toward Northeast primaries on an increasingly direct path to party nominations after trouncing their challengers Tuesday in New York.

Clinton, now 81 percent of the way toward clinching the Democratic nomination that eluded her eight years ago, can lose every remaining contest and still prevail. Advisers to rival Bernie Sanders offered no signs of the Vermont senator giving up before the Democrats’ Philadelphia convention.

Trump is increasingly optimistic about his chances in five states set to vote on Tuesday: Rhode Island, Connecticut, Pennsylvania, Delaware and Maryland. He is now the only Republican candidate who can possibly collect the 1,237 delegate majority needed to claim the nomination before the party’s July convention. Cruz and Ohio Gov. John Kasich have been mathematically eliminated, yet both contend they can win the nomination at the convention.

Despite getting shut out of the delegate race in New York, Cruz is aggressively courting delegates across the nation who could hold great sway at the convention.

Kasich and Cruz set their sights on Pennsylvania and Indiana respectively, looking to capitalize on any remaining delegates up for grabs, even as polls show Trump dominating in some of the biggest remaining races. Trump, meanwhile, joined his wife and adult children on NBC’s “Today” Thursday for a town hall that discussed family and politics.

Trump weighed in on the decision to put Harriet Tubman on the face of the $20, replacing Andrew Jackson, a move he described as “pure political correctness.” He said Tubman is “fantastic,” but Jackson has “been on the bill for many, many years” and “really represented somebody that really was very important to this country.”

“There have been very few complaints the way it is. People go, they use the bathroom that they feel is appropriate. There has been so little trouble,” he said.

The side-by-side GOP efforts at this late stage — with Trump amassing primary victories while Cruz digs for the support of delegates who could settle the nomination — are unprecedented in recent presidential campaigns and add to the deeply uncertain nature of the race.

While the primary campaign is a focus of the RNC meeting, party leaders are painfully aware that any changes in the nomination process could fuel Trump’s charges of an unfair system. Party chairman Reince Priebus has discouraged any rule changes this week.

Priebus believes the convention rules should be left to the separate rules committee elected at the convention, made up of delegates being elected to seats across the country, said RNC senior strategist Sean Spicer.

“The chairman’s view is that the rules of the convention should be set by the delegates, by the grassroots Republican voters,” Spicer said.