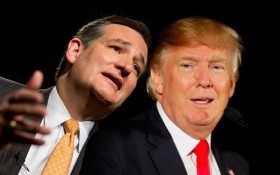 Texas Sen. Ted Cruz has been accused of running a presidential campaign full of dirty tricks and scandalous low blows.

On Sunday, in an increasingly desperate fight for the GOP nomination, he took to the talk show circuit to make his most outrageous accusation against billionaire Donald Trump — that Trump is mobbed up.

Ahead of the Super Tuesday presidential primaries that could help the Republican frontrunner expand his delegate lead, Cruz dismissed Trump’s wealth as a result of “picking the right Daddy” and suggested the billionaire has business ties to the Mafia that could surface if Trump’s tax returns are released.

“There have been multiple media reports about Donald’s business dealings with the mob, with the Mafia. Maybe his taxes show those business dealings are a lot more extensive than has been reported,” Cruz said in an interview with NBC News’s “Meet the Press.”

It’s not the first time the allegations have surfaced. Trump opponents have been unsuccessfully trying for years to connect him to the Mafia, largely because of the amount of construction work he has done in New York City and New Jersey, and because of his gambling operations.

But Cruz, who was accused of cheating his way to a win in the Iowa caucuses, is currently dealing with a major credibility problem that makes any of his allegations unlikely to stick.

Trump, for his part, relishes watching his rivals flailing desperately ahead of tomorrow’s Super Tuesday primaries, where Trump is expected to win nearly all of the states up for grabs.

“It’s amazing what’s going on,” he told NBC, calling his campaign a “movement.”

“You can’t tell much from tax returns” anyway, Trump said on CNN.