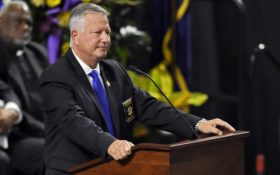 A former South Carolina sheriff pleaded guilty Wednesday to committing crimes while in office, becoming the 10th sheriff to do so in the past decade.

But like four of those other former lawmen, he won’t spend any time in prison.

Boone was sentenced to one day in jail which Judge William McKinnon said he satisfied during the hours in custody when he was booked and awaiting a bond hearing in April, according to media outlets.

Boone was also ordered to serve five years of probation. If he violates his probation terms, he could serve a five-year prison sentence. His probation can end after 18 months if he pays back what he stole, closes his campaign bank account and completes substance abuse and mental health treatment.

Boone becomes one of five of 10 South Carolina sheriffs to plead guilty to crimes and avoid jail in the last decade. Five more pleaded guilty or were convicted and were sent to prison. They include former Greenville County Sheriff Will Lewis, sentenced to a year in prison after he was convicted in October for using public resources to arrange an affair.

Boone spent the public money on a wide range of items, including bicycle and baseball equipment, coolers, tools and floor mats, according to indictments.

He was ordered to pay back the $17,000 of public money he illegally spent.

Prosecutors did not ask for prison time and Boone’s lawyer asked he be sentenced to probation.

At the end of his plea hearing in Sumter County, Boone apologized for taking public money and breaking the trust the people of Florence County placed in him. He also apologized to State Law Enforcement Division agents who investigated the case.

When Florence County deputies and Florence city police officers were ambushed in October 2018, Boone — then under investigation by state agents — refused the agency’s help, instead calling in deputies from Richland County, where the state capitol is located,

The second-in-command at SLED, Cricket Grant, rushed to the scene where two officers would end up dead and five others hurt.

Grant “told me it was your jurisdiction. And I said no, Richland County is on the way. And your remarks were before you left that I would regret that. You’re right. Like I say, I apologize to you,” Boone said in court according to WPDE-TV.

Former Lee County Sheriff E.J. Melvin is currently serving the longest sentence of any of the ex-South Carolina sheriffs: 17-years in federal prison. He was sentenced in 2011.

Melvin sold drugs from the back of his sheriff’s SUV. FBI agents tapped Melvin’s phone, gave him a list of suspected drug dealers in his county and listened as the sheriff tipped them off that federal agents were looking into them.