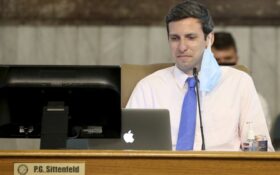 A Cincinnati city councilman who has been planning to run for mayor has been indicted on federal corruption charges.

An indictment Thursday shows that Democrat P.G. Sittenfeld faces six federal counts related to bribery and extortion. It states that Sittenfeld solicited $40,000 in payments to his political action committee to “deliver the votes” in the city council for a proposed downtown real estate development.

Sittenfeld pleaded not guilty before a federal magistrate and was released without bond but with restrictions including on travel. He surrendered his passport.

“Mr. Sittenfeld was no longer working for the citizens of Cincinnati, but working for Project 1,” DeVillers said, referencing the proposed real estate project. FBI agents disguised as developers gave Sittenfeld the $40,000 bribe, which DeVillers said remained in the PAC fund.

“We need to clean house,” Cranley told reporters outside the city hall, saying that city government reforms are clearly needed after the third corruption case this year.

Earlier this year, Democrat Tamaya Dennard resigned from city council after her arrest. She is awaiting sentencing after pleading guilty to a wire fraud-related charge. Republican Jeff Pastor was arrested Nov. 10 on bribery, extortion and money laundering charges. His attorney has said the councilman will fight the charges.

Sittenfeld, often active on Twitter, said on social media after Pastor’s arrest that “This is a sad day for our city,” and spoke previously in a video about his mayoral hopes about the importance of principled action.

Cincinnati will have elections in 2021, including for mayor. Cranley is term-limited. Sittenfeld had been considered a top contender to succeed Cranley. In the 2016 Democratic primary for U.S. Senate, Sittenfeld finished far behind Gov. Ted Strickland, who ultimately lost in the general election to Republican Sen. Rob Portman.