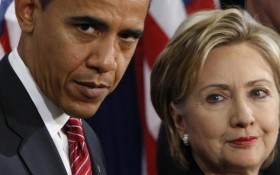 For months, President Barack Obama had been going out of his way to distance himself from the Hillary Clinton email scandal that continues to spin out of control.

Now we may know why — the batch of Hillary Clinton emails released at the end of January prove that Obama mishandled classified information himself.

And his actions may have been more than occasional lapses in judgment. They could be illegal.

In a recent editorial in the National Review, Andrew McCarthy, the former federal prosecutor who tried the perpetrators of the 1993 World Trade Center bombing, laid out the case that Obama was at least negligent in how he handled national security matters over email with Clinton.

In the January release of Clinton emails, the United States State Department acknowledged it was withholding 18 emails between Obama and then-Secretary of State Clinton. The information has been declared sensitive and the Obama Administration is claiming that releasing it would jeopardize the president’s ability to get “unvarnished advice” from his top advisers.

But the fact that the information is so sensitive, McCarthy says, is a big problem for Obama because he was well aware that he was sending the information to Clinton’s private email account.

“Think about what this means,” McCarthy wrote. “Not only is it obvious that President Obama knew Mrs. Clinton was conducting government business over her private email account, the exchanges the president engaged in with his secretary of state over this unsecured system clearly involved sensitive issues of policy.”

While it remains highly unlikely that Obama will face any punishment over his actions, McCarthy said it’s time for the media and citizens to start asking questions.

“From these facts and circumstances, we must deduce that it is possible, if not highly likely, that President Obama himself has been grossly negligent in handling classified information.”