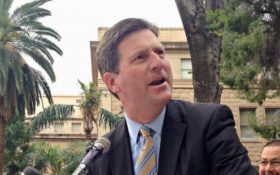 The mainstream media pushes the liberal narrative that sanctuary cities are good, because the policy helps protect illegal immigrants who come forward as witnesses to a crime.

But the city of Phoenix, AZ has found that this liberal story is a complete and total lie. In fact, it’s not even close to the truth.

Since dropping its sanctuary city status in 2008, law enforcement officers in the Arizona metropolitan area have seen a staggering decrease in crime — overall down 25%, particularly in stolen vehicles and violence in the city, as reported on by Fox News.

“We saw a 20-year low crime rate. When we were allowed and had the discretion to contact our federal immigration partners, crime fell drastically,” said Mark Spencer, a police officer who patrolled in Phoenix for 25 years.

A study published by the University of California, Riverside in 2016 shows that “violent crime is slightly higher in sanctuary cities.”

According to City-Data.com, after becoming a “non-sanctuary” city, Phoenix saw a 27% decrease in murders, a 23% decrease in robberies, and a 13% decrease in assaults — in just one year!

“We saw a decrease in crime,” said Levi Bolton, the executive director to the Arizona Police Association and former Phoenix cop. “It had a deterrent effect on folks because the risk of discovery went up exponentially when we actually enforced the law.”

Imagine that: mayors actually allow the police to do their jobs properly, and crime is reduced exponentially!

Trump and ICE have been instrumental in removing illegal immigrants from America, and Americans are now finally starting to realize that arresting criminals and deporting them makes legal citizens much safer.

Despite the definitive results of Phoenix cops, Democrats are trying to turn California into the first sanctuary state, a law that is opposed by the state’s sheriff associate according to The Los Angeles Times.

When will they learn!?

The truth is clear in the data — allowing criminals to go unpunished only invites more crime into the streets.