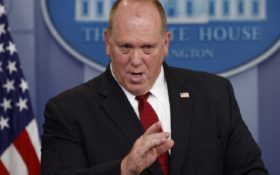 The Acting Director of the Immigration and Customs Enforcemnet (ICE) Thomas Homan has conservative’s cheering after his Tuesday announcement. Homan detailed his plan to crack down on illegal criminals in so-called “sanctuary cities” by sending more agents and more resources.

He condemned the “ludicrous” Democrat strongholds, such as New York City, San Francisco, and Chicago, for harboring fugitives.

In other words, the rule of law is back.

“It’s not OK to violate the laws of this country anymore,” Homan warned “You’re going to be held accountable.”

Homan then blasted the liberal mayors and governors that are fighting for these criminal safe-havens, and let Democrats know he means business.

“What I want to get is a clear understanding from everybody, from the congressmen to the politicians to law enforcement to those who enter the country illegally, that ICE is open for business,” Homan declared.

President Donald Trump has come through on his campaign promise by leading the charge against illegals. He gave Homan the go-ahead ICE was looking for when he told Homan that “there’s no population of alien that’s off the table anymore.”

Sponsored: The #1 most powerful anti-aging substance is…

Homan praised Trump’s leadership on this issue citing statistics that say illegal border crossings are down 70% under Trump, while the arrest of illegal criminals are up a staggering 40%.

Even bleeding heart liberals can’t deny that he’s had a major impact.

Homan seeks to return to an America that respects law and order, where cities were honest and looked out for the well-being of their legal residents.

“In the America I grew up in, cities didn’t shield people who violated the law,” he said. With Trump’s order, there’s nothing standing in the way of ICE agents’ enforcement of federal law — even local police forces instructed to by liberal mayors.

Now that Trump has “taken the handcuffs off law enforcement,” ICE can now do its job.

And Homan’s doing his job without apology!

“They victimize the communities they live in. They’ve spread and they’ve got our attention. … We’re coming after them very hard,” Homan promised.