[Video] Crazed criminal has shootout with police on bus! - The Horn News 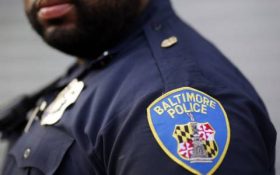 An armed robbery suspect fleeing the scene of the crime jumped aboard a commuter bus In Baltimore on Wednesday and then engaged in a firefight with police before he was shot dead. A police officer and a civilian were both seriously wounded.

The bus was surrounded by police after the suspect tried to use it to get away from the scene of an armed robbery at a shopping center in Dundalk about 2:50 p.m., Baltimore County Police Department spokeswoman Officer Jennifer Peach said at a news conference.

Peach said the man had robbed two people at gunpoint and that he fired shots from the bus at officers, who shot back.

Video that police confirmed was of the shootout showed a man shooting from the front and rear doors of the bus.

The suspect fled the bus, collapsed and died at the scene, the department said in a statement. He has not yet been identified, and police have not released his race. The officer, who was shot in her leg, was taken to a Baltimore hospital in serious condition. The wounded civilian, also a woman, was in serious condition at another hospital, police said.

The bus had working surveillance cameras, and police officers’ body camera footage also was being reviewed, police said in a statement.