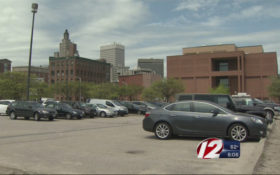 Police in Austin have released surveillance video showing a car plunging seven stories from a downtown parking garage and striking another vehicle as it lands in an alley.

The video released Thursday shows the car landing atop an SUV then rolling upside down onto the ground. Moments later, people run to help the driver escape.

Police say the July accident happened when the woman drove through retention wires on the seventh floor, hit a building across the street and plunged to the alley below.

The SUV’s driver wasn’t hurt. Austin-Travis County Emergency Medical Services officials said at the time that the woman was treated at a hospital.

Last September, a sport utility vehicle plunged from the ninth floor of the same parking garage.