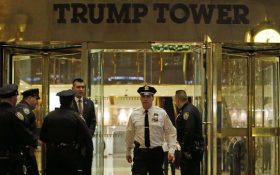 An armed man at Trump Tower refused to cooperate with authorities Tuesday night and barged into a restricted area — and the Secret Service was forced act.

Thankfully, no one was hurt in the incident and, according to The New York Daily News, the unidentified man was taken into custody by New York police officers after the confrontation.

Authorities say that Secret Service agents stopped a man armed with a gun at the Trump Tower on Fifth Avenue in New York City just after 10 pm EST after the man walked through a restricted area. It has been reported that the man was removed in handcuffs for refusing to comply with authorities, but authorities say he has not yet been charged.

It remains unclear if the man was a threat to Republican presidential nominee Donald Trump, or if Trump was even present at the building during the time.

Trump is due to give a speech in Florida Wednesday afternoon, following an appearance at a rally in Virginia on Tuesday.