Cowboys for Trump: Trump campaign cut ties with us - The Horn News 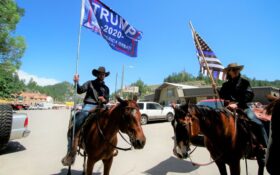 The leader of Cowboys for Trump said Friday the reelection campaign for President Donald Trump is distancing itself from the group after the leader posted a video saying some Black athletes should “go back to Africa.”

Cowboys for Trump founder Couy Griffin told The Associated Press that a Trump campaign representative contacted him this week and said it would distance itself from the group’s activities.

“A campaign representative told me that if someone asked the president about Cowboys for Trump he would have to do that,” Griffin said. “And I understand that. We are not affiliated with the campaign.”

Samantha Zager, Deputy National Press Secretary for Trump’s campaign, did not immediately return an email. While it’s unclear what distancing from the group might mean, Trump has in the past met with the leader and retweeted some of the group’s tweets.

The move comes after Griffin faced criticism this week following his Facebook live video where he chastised Black athletes who support performances at NFL games of “Lift Ev’ry Voice and Sing” — traditionally known as the Black National Anthem — as a gesture of solidarity against racial injustice.

“They want to destroy our country. They want to talk about playing a Black national anthem before football games? I got a better idea, why don’t you go back to Africa and form your little football teams over in Africa and you can play on a(n) old beat-out dirt lot and you can play your Black national anthem there. How about that?” Griffin said in the video. “This is America, we play the National Anthem in America today.”

Griffin also offered to give people of color what he called a “101” lesson on racial identity and said anyone who does not identify as “American” first or opposes the Second Amendment right to bear arms should leave the U.S. or “go home.” Statements like “go back to where you came from” is a racist insult aimed for decades at immigrants and African Americans in the United States.

Griffin, who is also an Otero County Commissioner, said he recorded the speech from a southern New Mexico mountaintop after fasting for three days, contemplating the nation’s political fate as the November election approaches.

Griffin said he now sees that he chose his words poorly and isn’t a racist despite what critics say.