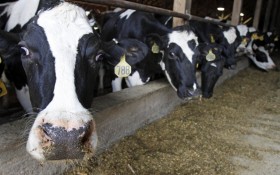 Put your heads together and think, boys! Police are hoping a farm device used to feed cattle will finally help corral a cow that has been on the loose for months in a central New York town.

Officers in New Hartford have put feed in a headlock feeder and placed the device along a road outside Utica where the rogue cow has been spotted. Headlock feeders have locking mechanisms that trap a cow’s head while it’s feeding.

Police tell the Utica Observer-Dispatch (http://bit.ly/1QKTgyu ) the 1,500-pound cow has been on the loose for several months. Efforts to identify its owner have been unsuccessful.

A local farmer has agreed to take the cow if it is eventually caught.

Motorists spotted the cow last week as it ran for several miles on a local road before bolting into the woods.