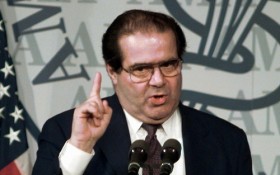 The death of former Supreme Court Justice Antonin Scalia has been the subject of rampant speculation since his body was discovered at a Texas hunting retreat earlier this month.

Now, new details are emerging that are sure to present more questions than answers for those who are demanding an investigation into Scalia’s death.

When Scalia’s body was found in his bed at the Cibolo Creek Ranch in Shafter, TX on February 13, the news sent a shockwave through the American public. The death of a conservative Supreme Court justice during President Barack Obama’s last year in office created an opportunity to swing the entire court to the left.

The timing was suspicious to say the least, even after details emerged that Scalia suffered from a variety of health problems including sleep apnea, diabetes, and chronic obstructive pulmonary disease.

And the more details that emerge about Scalia’s death, the more material that conspiracy theorists have to work with.

According to a sheriff’s report released this week, local police were ordered to stay away from Scalia’s body after it was initially discovered, and were significantly delayed in responding.

Ranch owner John Poindexter was reportedly initially vague when reporting the death to authorities, which Presidio County Sheriff Danny Dominguez says caused the delay. Poindexter also reportedly would not reveal during a phone call who had died.

“I then advised Poindexter that a death reported in Presidio County was under my jurisdiction and that it should be reported to my office,” Dominguez wrote. “He then stated to me that this death was way beyond my authority and that it should go to the Feds.”

After a series of phone calls, Dominguez met U.S. marshals at the ranch about 190 miles southeast of El Paso, where they were taken to Scalia’s room.

The effort to keep Dominguez away from Scalia’s body until federal officials arrived has spurned questions among those who want an inquiry into Scalia’s death — and the nature of Scalia’s Texas trip has also raised eyebrows.

The Washington Post is reporting that Scalia was a member of a secret society called the International Order of St. Hubertus, a male-only group of elite hunters that dates back to the 1600s. It appears the hunting retreat may have included several group members, which also may have contributed to the secrecy around the trip.