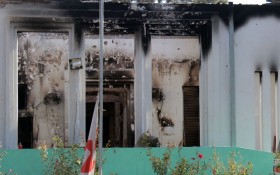 A former American intelligence operative has come forward with a shocking revelation regarding the tragic US military attack on the Doctors without Borders hospital in Afghanistan earlier this month.

Special operatives had already scouted the location, and had reported it was a civilian hospital. But the Obama administration had it bombed anyway.

American special operations analysts had scrutinized the hospital days before it was destroyed because they believed it was being used by a Pakistani operative to coordinate Taliban activity, according to a report by the Associated Press.

The analysts knew it was a medical facility, but commanders unleashed the AC-130 gunship on the hospital anyway. The attack killed at least 22 patients and hospital staff.

The Pentagon initially said the attack was to protect U.S. troops engaged in a firefight and has since said it was a mistake.

After the attack, some US analysts initially said the strike against the hospital had been justified, the former officer says, because they concluded that a Pakistani spy, believed to have been working for his country’s Inter-Service Intelligence directorate, had been killed.

No evidence has surfaced publicly suggesting a Pakistani died in the attack, and Doctors without Borders, the international organization that ran the hospital, says none of its staff was Pakistani. The former intelligence official making these revelations was not authorized to comment publicly and spoke only on condition of anonymity.

The top U.S. officer in Afghanistan, Gen. John Campbell, has said the strike was a mistake, but has refused to explain how it happened or who granted final approval.

Doctors without Borders has condemned the bombing as a war crime. It insists that no gunmen, weapons or ammunition were in the building, and is calling for an international probe.

Doctors without Borders officials say the U.S. airplane made five separate strafing runs over an hour, directing heavy fire on the main hospital building, which contained the emergency room and intensive care unit. Surrounding buildings were not struck, they say.

Typically, pilots flying air support missions would have maps showing protected sites such as hospitals and mosques. If commanders concluded that enemies were operating from a protected site, they would follow procedures designed to minimize civilian casualties. That would generally mean surrounding a building with troops, not blowing it to bits from the air.

What the new details suggest “is that the hospital was intentionally targeted, killing at least 22 patients and MSF staff,” said Meinie Nicolai, president of the operational directorate of Doctors without Borders, which is also known by its French initials MSF. “This would amount to a premeditated massacre.”

Nicolai said in an email exchange that the group’s staff “reported a calm night and that there were no armed combatants, nor active fighting in or from the compound prior to the airstrikes.”