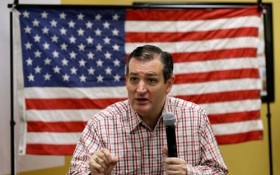 But the best news he received may have come earlier in the day, when an Illinois judge dismissed a lawsuit claiming he was ineligible to become president.

The suit was filed in Cook County Circuit Court and argued that Cruz was ineligible to appear on the Illinois ballot. Whether Cruz, who was born in Canada to an American mother, is a “natural born citizen” as required by the Constitution has been the subject of much debate during the race for the GOP nomination.

If Cruz had lost in Illinois, it would have quickly sparked a ripple effect and similar lawsuits in other states.

But Cruz may not be out of the woods yet.

While Judge Maureen Ward Kirby tossed the case, she only did so on a technicality, which opens the possibility that the lawsuit could be refiled — likely at a politically convenient moment, some political analysts warn.

Kirby says the suburban Chicago attorney who filed the complaint, Lawrence Joyce, failed to give a copy of it to Cruz or state electoral board members, as required by Illinois law. Instead, Joyce served only lawyers representing Cruz and the board.

Joyce admitted that he’ll decide whether to appeal after seeing how Cruz fares in the primaries.