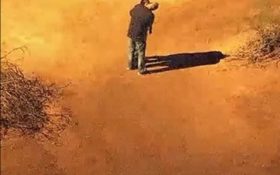 A couple got out of an SUV and then embraced before surrendering to pursuing sheriff’s deputies after a chase for miles across part of metro Phoenix.

Officers converged on the pair and ordered them to the ground after the SUV crashed into a ditch Wednesday evening.

Thirty-five-year-old Dustin Perkins was jailed on suspicion of criminal damage, unlawful flight and other offenses.

The Pinal County Sheriff’s Office says the woman was hospitalized with injuries apparently suffered in the crash. She wasn’t immediately booked into jail.

The chase involving officers from several agencies began a short time after a Mea police unit spotted a vehicle which another policy agency had reported as stolen.

Perkins told news crews that the vehicle belongs to his father and that he was trying to return it.