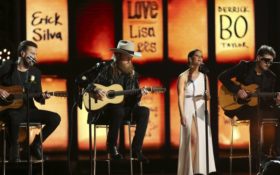 Three artists who performed at a country music festival that became the site of the deadliest mass shooting in modern U.S. history honored those music fans lost at deadly concert attacks with a tearful performance at the Grammy Awards.

Country artists Eric Church, Maren Morris and Brothers Osborne delivered a moving performance of Eric Clapton’s Grammy-winning classic “Tears in Heaven,” during the 60th annual Grammys Awards in New York City on Sunday, the names of victims behind them.

“All of country music was reminded in the most tragic way then connection we share with fans and the loving power that music will always provide,” said Eric Church who seemed to struggle to speak.

The artists put their own spin on the mournful song in honor of the victims at the Route 91 Harvest Festival last October in Las Vegas, as well as a bombing outside an Ariana Grande concert in Manchester, England, in May.

“Tears in Heaven,” which won three Grammys in 1993 including record and song of the year, was written after Clapton’s four-year-old son died in 1991 after falling out of a high-rise window.

The touching tribute was handled tenderly between singer TJ Osborne’s soulful baritone, Morris’ Texas twang and Church’s forceful singing, although a bad microphone made much of Morris’ intro before the song unintelligible.

“The painful truth is that this year in just those two events 81 music lovers, just like us, went out to enjoy a night of music and never came back home,” Morris said.