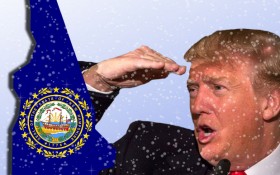 Even billionaire GOP frontrunner Donald Trump admits his biggest challenge is turning fans into voters — and that problem may have cost him a win in the Iowa caucuses.

Trump’s ground game will get another test in today’s New Hampshire primary, where he enjoys a large lead in the polls. And his campaign is hoping that voters (and the weather) cooperate.

Trump’s campaign has expressed concern that the weather forecast in the state threatens to hit the billionaire’s campaign hardest.

New Hampshire voters aren’t ninnies about the weather. But the state is expected to be blanketed in several inches of snow today, which could affect turnout. And low turnout almost always digs deep into the frontrunner’s numbers, especially when voters don’t think a candidate needs their support to win.

Low voter turnout would be a bad scenario for Trump, who had trouble mobilizing some of his supporters in Iowa. Coming off the Iowa loss, he needs a New Hampshire win to continue carrying the mantle of the GOP’s frontrunner.

Trump told CNN on Sunday that he wants to come in first in New Hampshire — and polls show he should — but he doesn’t need to finish that high to continue his campaign.

Elsewhere on the Republican side, there’s a fierce five-way battle among governors Chris Christie and John Kasich, former Florida Gov. Jeb Bush, Sen. Ted Cruz, and Sen. Marco Rubio to be the alternative that establishment Republicans might like better than Trump.

With a Trump win expected, GOP pundits are watching closely to see who may finish in second and third place. Right now, poll show it’s too close to call — and voter turnout will be an enormous factor.