Female judge arrested after having threesomes... inside her own courtroom! - The Horn News 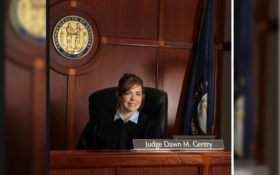 She has been charged after having three-way sexual encounters inside her court chamber and let employees get drunk on the job. Her courtroom was what officials described as a fraternity house atmosphere.

The Kentucky Judicial Conduct Commission has filed criminal charges against the family court judge, accusing her of favoritism, making sexual advances, and other misconduct.

The commission explained in the proceedings report how it investigated claims that the judge made inappropriate sexual advances, traded jobs for donations to her campaign, used a legal panel for campaign work, retaliated against employees and attorneys, kept false time sheets, allowed guitars to be played in the office, and let her employees consume alcohol while working.

The legal panel is Gentry’s group designed to give free help to children facing abuse.

In a complaint affidavit obtained by the paper, former panel member Katherine Schulz says Gentry sexually harassed her, asked her if she would have sex with Gentry’s husband and join Gentry in group sex with Stephen Penrose, who is Gentry’s former pastor and current case specialist.

Schulz says when she didn’t comply with Gentry’s sexual advances, she began to feel ostracized and eventually resigned.

Attorney Mike Hummel says Gentry dismissed him from the panel because he didn’t donate enough money to her reelection campaign.

“This isn’t just little bulls–t that happens behind the scenes in every county,” Hummel says. “This is someone abusing power to affect the lives of others.

Gentry is also accused of having an extramarital affair with Penrose, which led to her hiring him.

Gentry denied the allegations to the commission, including having group sex with Penrose and others. Gentry also acknowledged appointing her “acquaintances” to a permanent custody roster but added, “almost all attorneys who practice in this county” are her acquaintances.

Gentry faces a disciplinary hearing, but a date has not been set.

It’s unclear whether Gentry has an attorney who can comment on her behalf.