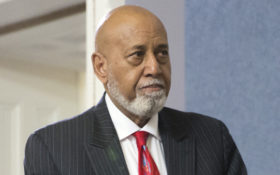 Florida Democratic Rep. Alcee Hastings raised eyebrows on Sunday when he made a casual joke about killing President Donald Trump at a rally.

This isn’t the first time Hastings has acted out, either. Hastings was impeached for bribery and perjury in 1989… and he hasn’t stayed out of trouble since.

During a speech he gave at a rally in the Sunshine State, Hastings cracked a joke about the president drowning in the Potomac River and nobody being there to save him.

Critics have warned that Democrats increasingly violent rhetoric is dangerous — but Hastings thinks it’s funny to kill his political opponents?

“I will tell you one joke,” Hastings said. “Do you know the difference between a crisis and a catastrophe?”

“A crisis is if Donald Trump falls into the Potomac River and can’t swim,’” Hastings said, retelling the joke. “And a catastrophe is anybody saves his ass.”

The joke received laughs and cheers from the liberal crowd, but Twitter users condemned the disturbing joke —

…And Alcee Hastings proves he is a racist bigot full of hate who needs to be investigated by the Secret Service.

Disgraceful. Alcee Hastings is an abomination. Remember he was impeached as a federal judge and recently cost taxpayers $220k to settle a sexual harassment lawsuit. #WalkAwayFromDemocrats2018 https://t.co/KtE1D2IO6O

Rep #AlceeHastings finds humor in #Trump drowning in the Potomac. What a sleazebag. Despicable behavior.

Hastings knows a little about a catastrophe. He was the sixth ever federal judge in history to be removed from office by the Senate. In 1989 he was impeached for bribery and perjury, and not long after he was convicted by the United States Senate.

This was not his only dirty dealings, either. Hastings also caused a major controversy in 2011 when a former employee sued him alleged his sexually harassed her.

According to Roll Call, the Treasury Department paid up $220,000 to settle the lawsuit.

It is outrageous that this man reportedly harassed an employee, was impeached by the Senate, and now is making Trump death jokes… and still has a job!

Do you think Hastings should be removed from office for this joke? Share your opinions below —

Do you think Hastings should be removed from office for this joke?