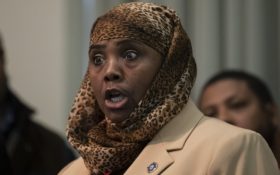 The Democratic party sunk to a new low after one of its representatives was charged with stealing more than $500,000 from a charity she controlled that was meant to help the poor and mentally ill.

Prosecutors charged Philadelphia lawmaker Rep. Movita Johnson-Harrell on Wednesday. Authorities say used the charity for years as a means to enrich herself and live a lavish lifestyle.

They said the money donated went to buying designer clothing, fur coats, a Porsche, tuition for a relative, and vacations to Mexico and Florida.

They said she also spent $8,000 to pay off a criminal restitution from a 2014 conviction for not paying unemployment taxes.

Pennsylvania Attorney General Josh Shapiro’s office also accused Johnson-Harrell of perjury, tampering with public records, theft, and other charges. Shapiro said a plea deal was expected to be worked out.

The 53-year-old Democrat won a special election in March in a west Philadelphia district.

Johnson-Harrell, the first female Muslim member of the House, came to office with the intensely personal story of having endured the shooting deaths of her father, brother, cousin, and 18-year-old son. She campaigned on a platform of ending gun violence, and is active in an anti-gun violence foundation named for her son Charles, who was shot to death in 2011.

She turned herself in to police Wednesday in Philadelphia. Through her lawyers, she released a statement saying she will resign from her $89,000-a-year House seat later in December.

“I am saddened and dismayed by the nature of the allegations brought against me today,” she said.

Her attorney, Jessica Natali, said they were ”ïn the early stage of this case” and declined to “address its merits in the media.”

At a Harrisburg news conference, Shapiro said Johnson-Harrell engaged in “significant and systematic corruption” involving the payments intended for the people who came to her charity for help.

“Defrauding a nonprofit or defrauding taxpayers and then systematically over many years lying to cover it up is unjust, it’s unfair and it is a crime,” Shapiro said.

Prosecutors said that the nonprofit will be reorganized and that Johnson-Harrell no longer has any control over its finances.

Johnson-Harrell previously held a $104,000 job with the victim and witness services unit of the Philadelphia district attorney’s office.

Court papers say the thefts continued even after she worked in the district attorney’s office and started serving in the state House.

On a state statement of financial disclosure form due in May, Johnson-Harrell reported owing the Internal Revenue Service about $50,000.

She told The Associated Press at that time that the debt went back more than a decade, from a business that helped people with special needs. She said an accountant advised her that if she had appealed in time, she would not have owed anything.

Johnson-Harrell quickly made her presence known in the Capitol. After she was sworn in to office, she objected to a colleague’s session-opening prayer that “at the name of Jesus every knee will bow.”

The lawmaker Johnson-Harrell succeeded was also charged while serving.

Democrat Vanessa Lowery Brown resigned in December after being sentenced to 23 months of probation for bribery and other offenses.