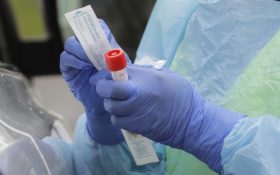 The media scorched President Donald Trump when he said there is “very conclusive” evidence the coronavirus came from a Chinese lab. Now, he’s got support from the man who headed the British intelligence agency, the MI6.

A new study suggests the Wuhan coronavirus was “engineered in a laboratory,” says Sir Richard Dearlove, who led the British version of the CIA from 1999 to 2004.

The deadly virus could “not have occurred naturally,” he told the “Planet Normal” podcast, which is run by the British newspaper The Telegraph.

Sir Dearlove spent part of the intervew summarizing a complicated study that came out in the prestigious, peer-reviewed journal QRB Journal.

The virus that caused the global COVID-19 pandemic “started as an accident” during experiments conducted at the Wuhan Institute of Virology, Dearloves says, without an ounce of doubt.

He says the game-changing report is just the tip of the iceberg.

“I think there’s a lot more that’s going to come out over the course of the next month,” or the next “couple of months,” the top UK spy states confidently.

Trump highlighted the fact that his predecessor, President Barack Obama, funded the Wuhan-based lab with money from hardworking U.S. taxpayers.

Under the Obama administration, the National Institutes of Health awarded the Chinese biomedical lab $7.1 million in grants for coronavirus experiments, including a $3.7 million NIH grant to test the coronavirus in bats.

Chinese officials—appointed by the CCP—bragged about the lab’s safety and “level-4” security, the tightest standards in the world.

But the Wuhan Institute of Virology only used level-2 protocols when it conducted its coronavirus bat experiments.

Chinese officials had “minimal protections against infections,” according to biosecurity expert Richard Ebright.

High-level officials in the U.S.—and now the UK—believe the virus leaked out of the lab and infected the local Chinese population.

After it escaped, the Chinese Communist Party swept everything under the rug, stockpiled face masks and other personal protective equipment, and knowingly let infected people travel the world.

The virus has caused 416,430 deaths worldwide—and cost 112,924 Americans their lives as of Thursday morning.

“There is zero doubt that the Chinese communist government has American blood on its hands,” said Sen. Martha McSally, R-Ariz.

The mainstream media has shot down as that view as a “conspiracy theory” and social media watchers block it as “misinformation.”

The left-leaning UK newspaper, The Guardian, published an article by a scientist who pushed back against Dearlove’s concerns, accusing him of “political posturing against China.”

But later in the article the author, Peter Daszak, admits his firm has “spent the past 15 years working in China” and being paid by the CCP.

Meanwhile, U.S. intelligence agencies have launched a full-scale investigation into the possibility of the virus originating in the lab.

“There’s a lot about his China policy that is right because we need an explanation from the Chinese as to what happened,” Sir Dearlove says. “We need an international inquiry. And yes I do on this issue agree with Trump’s hardline, and I think we should support it.”

Sir Dearlove says it’s time for the rest of the free, democratic Western countries “to modulate our relationship with the Chinese in the light of the type of regime that it is and not kid ourselves it’s something different.”

That includes keeping “critical infrastructure” out of the hands of Chinese companies like Huawei.

“I think there will be a complete reassessment of this situation for the UK and for many other countries in the aftermath of the pandemic,” he predicts.

Polls show the American people are split evenly between whether they believe the virus “came about naturally” or was “made in a lab.” One out of every four Americans believes “the virus was developed intentionally.”

“Those who are responsible are [going to be] held accountable,” U.S. Secretary of State Mike Pompeo promised.

Listen to the whole interview and make up your own mind.