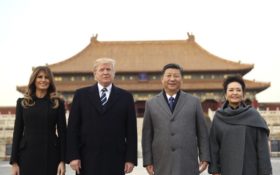 As deaths from coronavirus sweep all 50 states, President Donald Trump is drawing up plans to make China pay for spreading the deadly global health pandemic.

Chinese media outlets have admitted that Communist officials knew the virus, which originated in Wuhan, was spreading like wildfire. If they’d been honest, they could have prevented at least 95% of the world’s COVID-19 cases.

Instead, China lied about the outbreak, imprisoned Dr. Li Wenliang for blowing the whistle, and got its allies in the global media—and the Democratic Party—to parrot their anti-Trump propaganda.

While China and the Democrats use the virus to attack President Trump, most Americans pin the blame squarely on China—and they want Bejing to pay.

54% of Americans believe China should be “required to pay other countries for the spread of the virus,” according to a Harris poll published last week.

Three-quarters of all Americans, including two-thirds of Democrats, think China is guilty.

The coronavirus has cost tens of thousands of American lives, millions of U.S. jobs, and at least an estimated $5 trillion to the world economy—and the Trump administration is considering massive retaliation.

Here are five ways Trump can hold China’s feet to the fire for spreading the coronavirus.

The U.S. government could impound all $1.1 trillion of U.S. debt currently owned by the Chinese.

“The Department of the Treasury should electronically confiscate all U.S. Treasurys currently held by China and make it illegal for China to buy, hold, or sell U.S. Treasurys going forward,” wrote Gavin Clarkson in the conservative Washington Examiner.

“These prohibitions would apply to any subsidiary or agent of China’s Communist Party.”

But some economists warn that would look like the U.S. defaulting on its debt, Latin American-style, and could further damage the U.S. dollar.

Another way to hold China accountable is for America to empty Chinese bank accounts around the world to pay for U.S. medical costs.

“Seizing Chinese property would allow the United States to finally use international law to its advantage. Let China try to go to court and claim that the U.S., its allies, and the developing world have violated international rules,” wrote John Yoo, a former member of the George W. Bush administration.

“Let Beijing try to show that these nations have no right to compensation for its coverup of the coronavirus outbreak.”

The Trump administration is looking at a full-court press against China.

Other Republicans say the deadly Chinese virus should be a wake-up call about how many vital industries China controls—especially medicine.

China produces 40 percent of the “active pharmaceutical ingredients” for all drugs in the world.

“It was assumed that capitalism was going to change China, as opposed to China changing capitalism,” said Sen. Marco Rubio, R-Fla.

He said “one of the great flaws of the last 20, 30 years” is the belief that “countries could be heavily interdependent on one another for things critical to their international security, and that somehow that would never be impacted.”

China makes 95 percent of all ibuprofen (the key ingredient in Advil), 70 percent of acetaminophen (the pain-reliever in Tylenol), and almost half of the planet’s penicillin.

“We have to move that supply chain out of China while we also are combating them from a military perspective around the world,” she told talk show host Hugh Hewitt.

They’re calling for an effort to have vital medicines Made in America again.

Another congressman has asked the Trump administration to sue China in the International Court of Justice and “hold them accountable for mishandling” the outbreak. “If the United Nations cannot even do that, it has completely lost its purpose,” said Rep. Jim Banks, R-Ind.

Some people aren’t waiting for the government to take action. Larry Klayman’s Freedom Watch sued China for $20 trillion, claiming the Chinese intentionally used the coronavirus as bioterrorism against the U.S.

A Florida-based law firm plans to sue China for “tens of trillions” of dollars in “economic and non-economic damages” through a class action lawsuit.

Chinese Communists “have the money to pay for what they’ve done, and we should all together make China pay,” a spokesman said.

And the lawsuit shows a bipartisan flair: One of the advisers to the legal firm filing the lawsuit, the Berman Law Group, is Joe Biden’s brother Francis.

5. Surprise them — there’s no need to tell the Chinese government what we’re going to do.

The Trump administration said this week that it’s weighing its options.

“Those who are responsible are [going to be] held accountable,” U.S. Secretary of State Mike Pompeo told the German TV show “Bild” on Monday. “I’m very confident that that process will take place.”

Drink In The AM [Sponsored]

And most Democrats support Trump’s tough-on-China trade policy as a way to retaliate, according to the Harris poll.

The coronavirus could backfire on China and get Trump re-elected at the same time.